How To Unlock All Mario Kart 8 Characters 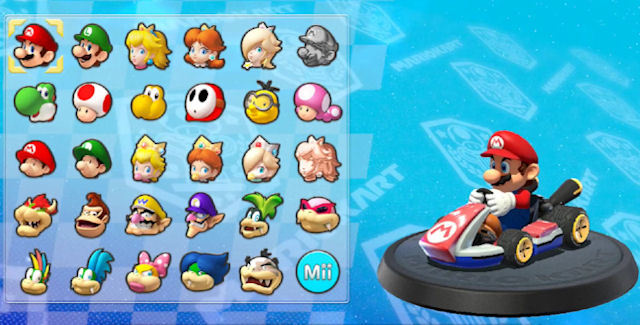 How to unlock all Mario Kart 8 characters? That question will be answered in this guide that shows you who to unlock to get the full roster of 30; and how to achieve that in the Wii U kart racing game.

Below we’ve listed the playable characters. Take the following steps to unlock each one, so that all unlockable characters in the game will be available to you.

How To Unlock All Mario Kart 8 Characters

As you can tell, when you start the game the only characters to choose from in the roster are: Baby Daisy, Baby Luigi, Baby Mario, Baby Peach, Bowser, Donkey Kong, Koopa Troopa, Luigi, Mario, Princess Daisy, Princess Peach, Shy Guy, Toad, Waluigi, Wario, and Yoshi.

How To Unlock All Additional Characters?: There is only one method to getting the rest of the characters. You can unlock more by earning Gold Trophy awards in Grand Prix mode Cups, using any character you like. Each time you complete a Grand Prix Cup with a Gold Trophy — by winning at least 3 out of 4 races — you will unlock a RANDOM CHARACTER from the list below until you have unlocked them all. However, you cannot repeat a Grand Prix on the same difficulty/engine class (50cc, 100cc, 150cc) or nothing will happen.

Future DLC Characters?: In Summer 2014 Nintendo of Japan has confirmed they will release a free Mercedes-Benz GLA car DLC (downloadable content). This opens up the doors to possible future characters DLC, because Nintendo worldwide are already doing this with Mario Golf: World Tour on the 3DS by adding Gold Mario, Nabbit, Rosalina and Toadette there. — Once enough time has passed after Mario Kart 8’s launch, no one should have a problem with the choice to download more character choices for a small fee.

Here we’ve listed the not (yet) included characters that were in prior Mario Kart games.

Please comment to share which old or new Nintendo character you think should be added as downloadable characters???

Who are your favorite Mario Kart 8 characters?