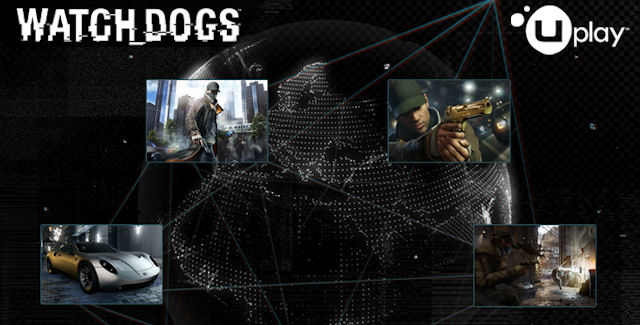 Before you start playing Watch Dogs, be sure to login to your existing Uplay Account via the game’s Main Menu, by selecting “Uplay”. If you’re not registered yet to Ubisoft’s official rewards service, then first sign up for an account at Uplay.com.

Once signed in, Uplay rewards you for playing Watch Dogs with a range of exclusive free content. Which is a fancy way of saying Uplay gives you access to unlockable cheats & extra items in Watch Dogs.

Note: To get newly unlocked vehicles delivered near you, open your in-game smartphone by pressing up on the Directional-Pad, go to the Car On Demand App and then select the vehicle you want.

The Uplay Actions of Watch Dogs:

Complete the following actions to receive Uplay Points, which you’ll be able to spend to unlock the Uplay Rewards mentioned in the second list below.

The Uplay Rewards of Watch Dogs:

These are all the extras you can unlock in the game if you have enough points to spend in your Uplay account, either from doing the actions listed above or from playing other Ubisoft games.

How To Cheat at Poker:

An easy video guide to cheating & winning at Poker in Watch Dogs.

Note: In every Hideout there’s a Wardrobe where you can change into new clothing that you’ve unlocked for the game.

The pre-order Bonus Packs with Special Editions include:

The Season Pass DLC add-ons include:

• The “Exclusive Untouchables Pack“: Pay homage to the classic Chicago mobster film with a M1 SMG weapon and a 1920s mobster outfit. – In North America, the Untouchables Pack will only be available through Season Pass.

These are all the Watch Dogs cheats on PC, Xbox 360, Xbox One, PS3, PS4 & Wii U so far. Until more are discovered, we made the handy Watch Dogs guides listed above to help you with tips and tricks for the game!

Do you know of any Watch Dogs cheats or unlockables?
Let us know in the comments, you’ll get credit for finding out. – Thanks for visiting!