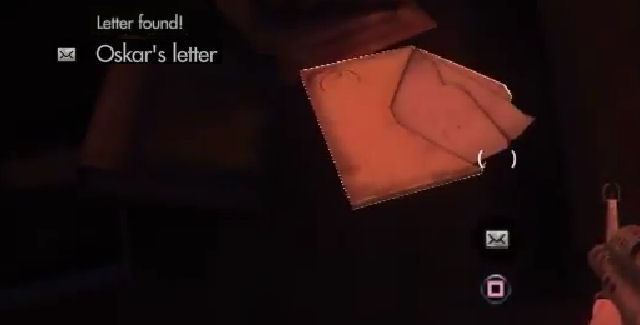 Finding all 10 Letter locations and picking them up will help unlock the following Achievement / Trophy:
* “The lives of others” (30 Gamerscore / Bronze Trophy) — Collect all letters.
* Bonus: You’ll learn lots more about the game’s backstory.

The Timeline for all these in-game Letters locations is listed below.

How to find missing Letters?: In-game the Letters will appear simply as white envelopes lying around (with a white glowing outline) that you can pick up to collect when you stand next to it. It can be confirmed as being Letters simply by walking up to it, as the on-screen icon will then tell you can press the action button/key (X on Xbox / Square on PlayStation) to pick up the Letter.

Tip: By holding down the back/select-button you can see how many collectibles you have found in the current mission.

Note: Although no collectibles are missable, you can search for missing items via chapter select at any time during or after completing the story. In chapter select you can see how many collectibles you have found per level. Each collectible has its own specific name, which makes it easier to identify what you are missing. To see their names, open up the collectible menu while playing a chapter.
Additionally, it should be pointed out that it doesn’t matter what timeline you are playing in, be it Fergus or Wyatt. Since the only difference between the two timelines is that you can either pick locks or hack circuits, so the levels and their collectibles are the same.

Does the game save each Letters you collect?: Yes, the game will automatically save the Letters you just collected (granted you picked up the Letter in question), so you don’t have to play to the next checkpoint or the end of the chapter. After picking up each collectible you can safely quit the mission without losing collectibles progress, and your progress even carries over to a brand new game.

How to get a collectibles map?: Stealth-klling commanders will mark some collectible locations with a question mark on your map, press down (on your controller’s Directional-Pad or keyboard) to open the map. This won’t necessarily unlock all locations though. – In addition, there are chapters that don’t have a commander period. And sometimes you must do little side quests to be rewarded with an item.

Where to find all Letters in Wolfenstein: The New Order? The in-game collectibles locations for the Letters are described in this detailed video guide with voice-over tips by Maka.

The Letters are listed in the video in the order that they appear in chronological order.

Timeline in minutes for the Chapter 1 Letters Locations Guide:

Timeline in minutes for the Chapter 2 Letters Locations Guide:

Timeline in minutes for the Chapter 3 Letters Locations Guide:

Timeline in minutes for the Chapter 4 Letters Locations Guide: