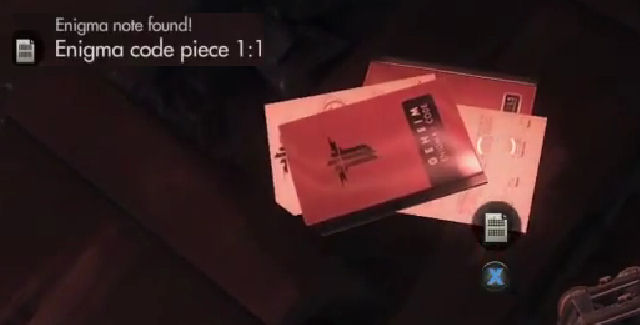 The Timeline for all these in-game Enigma Code Pieces locations is listed below.

Tip: By holding down the back/select-button you can see how many collectibles you have found in the current mission.

Note: Although no collectibles are missable, you can search for missing items via chapter select at any time during or after completing the story. In chapter select you can see how many collectibles you have found per level. Each collectible has its own specific name, which makes it easier to identify what you are missing. To see their names, open up the collectible menu while playing a chapter.
Additionally, it should be pointed out that it doesn’t matter what timeline you are playing in, be it Fergus or Wyatt. Since the only difference between the two timelines is that you can either pick locks or hack circuits, so the levels and their collectibles are the same.

How to get a collectibles map?: Stealth-klling commanders will mark some collectible locations with a question mark on your map, press down (on your controller’s Directional-Pad or keyboard) to open the map. This won’t necessarily unlock all locations though. – In addition, there are chapters that don’t have a commander period. And sometimes you must do little side quests to be rewarded with an item.

The Enigma Code Pieces are listed in the video in the order that they appear in chronological order.

• No Enigma Code Note to be found here.