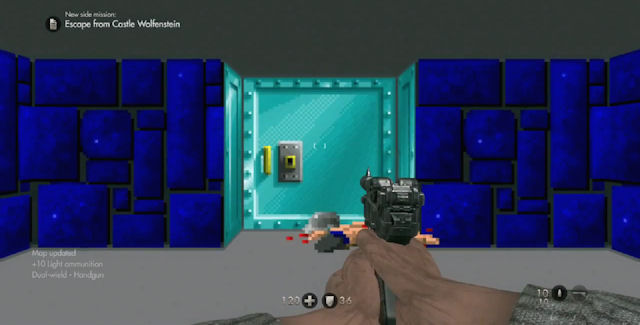 Let’s take a look at some funny Wolfenstein: The New Order easter eggs! They can be found if you know where to look! 🙂

Easter eggs have been confirmed for Wolfenstein: The New Order. Watch footage of them all below.

Location: In Chapters 5, 7 and 9 you’ll have access to the central Berlin hideout house that you and the Resistance have made your own.

How To Unlock & Play: Go into a room on the top floor with some crates and an empty bed with a light and Wolfenstein 3D poster above it. Walk up to the bed’s pillow/mattress and you’ll get the “Nightmare” indicator on-screen. Hold the action button to activate a bonus game… the first level of classic Wolfenstein 3D! You get to play “Escape from Castle Wolfenstein” with its glorious ‘2D graphics’ until you die and then you’ll wake up again in the bedroom you were in.

You can replay it to try and finish it by:
A) Replaying or restarting the Chapter you’re in and going back to the Wolfenstein 3D poster room. Finishing Wolfenstein 3D Level 1 will only result in you waking up in your bed.
B) It becomes available again after each time you return to the hideout (after missions).

Take a look at Wolfenstein 3D running in the new Wolfenstein: The New Order engine!

You’ll first need to collect each of the individual Enigma Code Pieces in the campaign using our locations guide (listed at the top of this page).

Crack Enigma Code #2 to unlock the secret “Walk In The Park Mode”:
– All HUD elements disabled, except for the interactive prompts.
– Rely fully on your senses to survive.
– ‘I Am Death Incarnate!’ difficulty level.

Crack Enigma Code #4 to unlock the secret “Ironman Mode”:
– Only one life.
– ‘Game Over’ if you die.
– ‘Uber’ difficulty level.

Location: In Chapter 4: Eisenwald Prison. During your escape, there’s a reference to the original BioShock game!

Your Resistance comrade asks (or commands!?) you do the following:
“Blazko, would you kindly shoot this Nazi in his god d*mned face?”

Vault 101 from Fallout 3 makes an appearance in Wolfenstein: The New Order on “Chapter 5: A New Hope”! It’s not a coincidence, since both game series are published by Bethesda Softworks.

This video shows where to find it:

If you look at Bobby Bran’s Keys before he drives into the building, he has a Quake 3 Rocket Launcher on his Keys!

Can only be found in Wyatt’s timeline.
In the Resistance safehouse in Berlin after you escape from the cement labor camp (you get to visit there in Chapters 5, 7 & 9) with the scientist you get to jam with none other than music legend Jimmy Hendricks who is J in the safe house. Just go to his room like you would and try to fix your self an armor upgrade, then he feeds you acid and the jam begins.

Have you found any Wolfenstein: The New Order easter eggs?