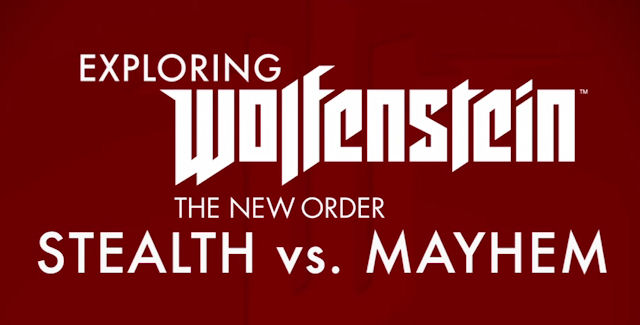 Take a look below…

BJ Blazkowicz is the resistance’s best hope of taking down General Deathshead’s army, but how will you achieve victory? In this gameplay video, the game’s creators provide a look at alternate paths through an early chapter of the game.

Wolfenstein: The New Order reignites the franchise widely recognized for pioneering the first-person shooter genre. Set in the 1960s, the monstrous Nazi regime has used mysterious advanced technology to win World War II. They now rule the globe with an iron fist. Wolfenstein: The New Order sends you across Europe on a harrowing mission to bring down the Nazi war machine.

This video guide shows a breakdown of the two weapon play styles in Wolfenstein: The New order. It’s Stealth vs. Mayhem!

Almost all weapons can be dual-wielded and upgraded. After “Chapter 2: Asylum” your starter weapons (like the Knife) will be replaced with superior firepower, to the point where BJ Blazkowicz pretty much becomes a walking tank. And we wouldn’t have Wolfenstein any other way!

I think that’s all of them, but please comment if you’ve found any other powerful weapons in Wolfenstein: The New Order or know of new ways to unlock them outside of playing through the main campaign.

Which of the Wolfenstein: The New Order weapons is your favorite?