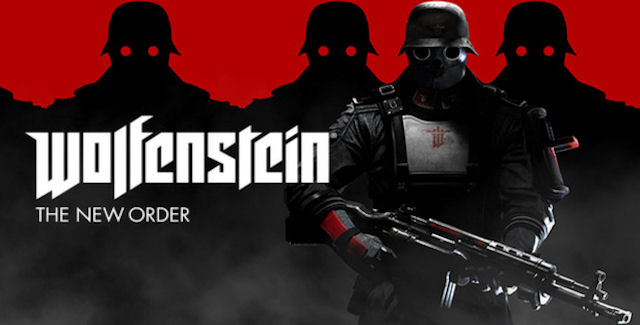 Our Wolfenstein: The New Order walkthrough will guide you through the beginning to ending moments of gameplay with strategy tips for this first-person shooter on the PC, Xbox 360, Xbox One, PS3 & PS4.

Wolfenstein: The New Order is a fictional story set in an alternate universe in the 1960’s. The Resistance has gathered and the time to rise against the Nazi’s is upon us. Only war hero B.J. Blazkowicz is violent enough to set history right.

Let’s start the Wolfenstein: The New Order walkthrough with an introduction video!

Please note that viewers must be at least 18 to watch, so no harm comes to those with innocent eyes. This game includes Blood and Gore, Intense Violence, Strong Language, Strong Sexual Content, Use of Drugs.

Wolfenstein: The New Order reignites the series that created the first-person shooter genre. The year is 1960 and the Nazi’s have won World War II. War hero B.J. Blazkowicz must launch an impossible counter-offensive against the monstrous Nazi regime that has conquered the globe.

Intense, cinematic and rendered in stunning detail with id Software’s id Tech® 5 engine, Wolfenstein sends players across Europe on a mission to bring down the Nazi war machine. Infiltrate their most heavily guarded facilities, battle high-tech Nazi legions, and take control of super-weapons that have conquered the earth – and beyond. Wolfenstein is under development at MachineGames, a studio comprised of a seasoned group of developers recognized for their work creating award-winning games.

Europe, 1960. The Nazis turned the tide of the war using a new kind of mysterious, advanced technology. Using unrelenting force and intimidation, they have brought even the most powerful of nations to their knees. The Nazi regime now rules the globe with an iron fist. Play as the one man who dares go up against the world’s most formidable military. You are B.J. Blazkowicz, the American war hero. You are the only man capable of rewriting history.

Welcome to the Wolfenstein: The New Order walkthrough! Doug will be your voice-over commentator showing you around the game’s areas, playing in the Fergis timeline.

But first, here are the game’s developers giving a “how to play” tutorial for the opening chapter.

Fergis and Wyatt Timeline Differences: Early on in the game you’ll be asked to make an impossible life and death choice between two Resistance members. Who will you let live, Fergis or Wyatt?
• Difference #1: The biggest difference between the two timelines is that you can either pick locks or hack circuits, but the levels themselves and their collectibles are all the same.
• Difference #2: As a result of your choice Tekla, an eccentric member of the resistance, only appears in the Fergis timeline. Wyatt’s timeline has a character ‘J’ AKA Jimmy Hendricks, who is nothing special, although if you go to his room to fix your self an armor upgrade, he feeds you acid and a music jam ensues. — In case you chose Wyatt and you’re worried you’re missing out, XCV has made a compilation of all Tekla cutscenes from the Fergis timeline for you to view here…

Tip: When a Kampfhund (robot dog) jumps and locks you in a clinch hold, you should stab it repeatedly to death before it kills you. Reduce the damage from its attacks by blocking.

Will B.J. Blazkowicz ever awake from his coma?

Let’s explore this new world and blow up some robots & other high-tech weaponry.

B.J. and Anya make it into Berlin, but the secret police is right on top of them.

Alternate Train Scene: After B.J. gets some coffee on the train you’ll get die Fraulein’s Photo Game section at the start of the chapter. If by the end of it you choose the photos, then you’ll have seen the same results as the video guide. However, if you choose the third option — grabbing the golden gun on the table — you’ll get an alternate scene. Even if it’s a death scene…

Tip: Takedowns cannot be performed on heavy soldiers as they are protected by thick metal armor.

After a daring escape from prison, B.J. & company find the resistance smack dab in the center of Berlin.

Tip: Consult the map to find the location of your next objective.