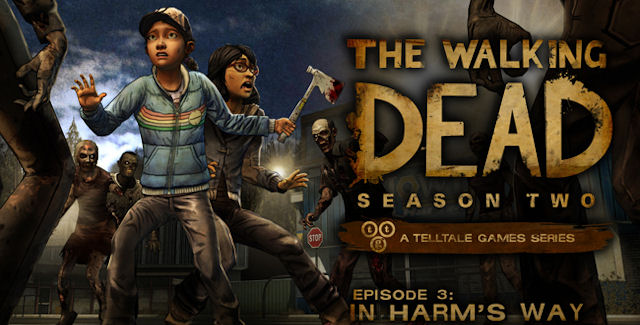 Our The Walking Dead Game: Season 2 Episode 3 walkthrough will guide you through the beginning to ending moments of gameplay with strategy tips for this survival-horror graphic adventure on the PC, Mac, Xbox 360, PS3, PS Vita & iOS devices.

Telltale Games is back for Season 2! This third part is called “The Walking Dead: Season 2 – Episode 3: In Harm’s Way”. Clementine and her group are captured by a brutally violent new leader called Carver. Are you ready to make hard-hitting decisions in order to escape?

Welcome to the The Walking Dead Game: Season 2 Episode 3 walkthrough! Doug will be your voice-over commentator showing you around the game’s areas.

Chapter 1 Description: Our captured group arrives at their new home AKA prison.

When the group is captured by Carver — a brutally violent new leader — Clementine must take drastic measures to escape from his grasp. Only the strong will survive in Episode 3 of The Walking Dead: The Game Season Two.

Chapter 4: Always the Quiet Ones & Chapter 5: Not in Nottingham

The Walking Dead Game: Season 2 Episode 3 Walkthrough continues on Page 2 with Chapter 6: Come Hither up to the ending.