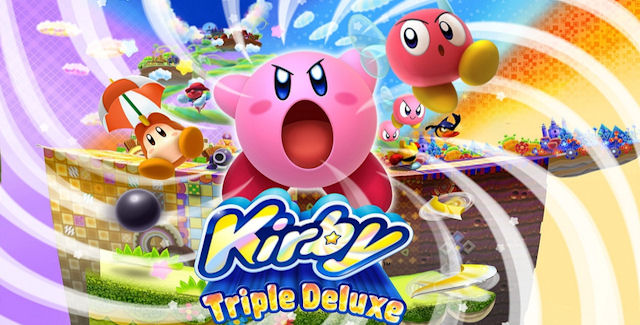 The Kirby Triple Deluxe walkthrough will guide you through the beginning to ending moments of gameplay with strategy tips for this action-platformer game on the Nintendo 3DS & 2DS.

Join Kirby in the all new 2D platformer Kirby: Triple Deluxe and rescue the kidnapped King Dedede on a mysterious huge plant which has grown in Dream Land, shifting Kirby’s own house in the air.

Please note that viewers must be at least 7 to watch, so no harm comes to those with innocent eyes. This game includes Cartoon Violence.

When a mysterious being kidnaps King Dedede atop a giant Dreamstalk, only Kirby can save the day! Jump from the foreground to the background in dynamic 3D side-scrolling environments while using new and returning copy abilities to defeat enemies. Duke it out in Kirby Fighters, a fierce 4-player* battle mode where you fight using a chosen ability like Sword or Ninja. The last Kirby standing reigns supreme. Whether you’re new to Kirby or an old fan, the Kirby: Triple Deluxe game offers a triple threat—action, adventure, and a battle mode.

A quiet life in Dream Land is never a guarantee for Kirby, especially when his house gets hoisted up to the land of Floralia, one night. Being stuck at the top of the Dreamstalk is bad enough but now King Dedede’s been royally kidnapped, too – it’s downright inconvenient! So, Kirby sets off to free King Dedede from forces unknown…

As the world’s cutest pink ball, your goal is to travel through different themed stages, collecting items, clearing enemies and fighting bosses at the end of each stage.

Kirby’s special skill lets him inhale enemies, which temporarily gives him their Abilities. He has 20 classic Abilities to choose from, and there’s 5 new Abilities like the rare Hypernova move, too. For example: With Fire Kirby can roll into a fireball and scorch through the air, and with Sword Kirby dons a green cap and wields a sword. Kirby’s classic sword-wielding ability is back for this quest to save King Dedede.

Watch for obstacles or enemies attacking from the background – dodge them, then touch a 3D Warpstar, for Kirby to leap to the background and defeat his attackers! Some hurdles can even be overcome by tilting your Nintendo 3DS or Nintendo 2DS system! With luck, Kirby will be back in Dream Land by supper time.

Kirby’s powerful copy ability returns, allowing him to inhale, spit and transform. Each gives him several different moves to try out. Employ new and returning abilities, 25 in all. The 5 new abilities include…

Welcome to the Kirby Triple Deluxe walkthrough! Cobi will be your voice-over commentator showing you around the game’s levels.