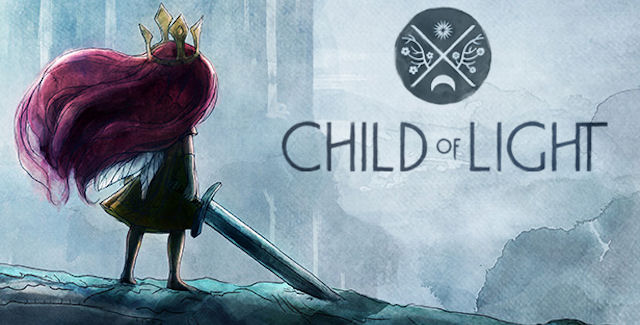 The Child of Light walkthrough will guide you through the beginning to ending moments of gameplay with strategy tips for this 2D Adventure-RPG game on the PS3, PS4, Xbox 360, Xbox One, PC & Wii U.

The Duke’s daughter Aurora is dead… and yet, she lives. Join Aurora across the mysterious kingdom of Lemuria on her quest to return home. Helped by Igniculus the firefly, Finn the Capilli, and many more, she must defeat the Queen of the Night, who has stolen the sun, the moon, and the stars.

Let’s start the Child of Light walkthrough with a story introduction video!

Please note that viewers must be at least age 7-10 to watch, in Europe & America respectively, so no harm comes to those with innocent eyes. This game includes Fantasy Violence, Use of Alcohol and Tobacco.

Index of Child of Light Guides:

Aurora, a young girl from 1895 Austria, awakens on the lost fairytale continent of Lemuria. To return home she must fight against the dark creatures of the Queen of the Night, who have stolen the sun, the moon and the stars. At stake is not only Lemuria, but Aurora’s true destiny.

Across your journey through Lemuria you will encounter many eccentric creatures, from spirits of the forest to talking mice to wicked witches and evil sea serpents. Discover a vast land with iconic locations and exciting dungeons that will evolve as Aurora regains the stolen lights.

Child of Light is a playable poem in which you will embody Aurora in her Quest to save the world of Lemuria of the evil Dark Queen and recover the Sun, the Moon and the stars. Complemented with a story carefully crafted in verse and rhyme, the breathtaking scenery of Lemuria is an invitation to explore a long lost world.

Child, tuck yourself in bed,
Let me tell a story,
Of Lemuria, a kingdom past,
And a girl born for glory.

Lost from our world came she,
Treachery gave close chase,
She raised her sword and flew,
For she feared not the race.

Three long lost lights to save,
A mad queen to defeat,
The journey would transform her,
Her destiny to meet.

The path home tragic and faint.
Beware the night, Child of Light.

The daughter of a duchess and duke from 1895 Austria, Aurora is intelligent and mischievous. Since her mother’s untimely death she has grown up sheltered by her father.

How To Activate Two Player Co-Op Mode:
— Use the mouse or a second controller. The second player will have control of Igniculus.

Igniculus the firefly came into being when Aurora entered Lemuria, so everything is new to him. He was sent to find Aurora by the Lady of the Forest. Igniculus blinds enemies and finds items to aid Aurora on her quest, among other things…

Igniculus’s Abilities Are:
— Healing: Igniculus can heal allies by glowing near them. Place Igniculus over the ally you want to heal and activate Glow.

— Blinding Dark Creatures: Igniculus can blind dark creatures by glowing near them, allowing you to pass by without triggering a battle. Place Igniculus over the dark creature you want to blind and activate Glow.

— Slowing Down Foes during Battle: Igniculus can slow down a foe by glowing during a battle. Place Igniculus over the dark creature you wish to slow down and activate Glow.

— Wishes: Igniculus consumes light when glowing. Once his Light Meter is empty, he cannot Glow anymore. Look for Wishes, which appear as balls of light floating in the landscape of Lemuria, to replenish the Light Meter. The Meter also auto-refills gradually on its own.

Chapter 1: Girl and The Firefly & The Queen of Light

Welcome to the Child of Light walkthrough! Shirrako will be your guide showing you around the game’s levels.

Skill Points Explained: As your party members level up, they will gain Skill Points. Use them in the Skills Menu, which can be reached from the Pause Menu, to buy new skills or to upgrade existing skills. When choosing skills, here’s what you should pay attention to…

Save Game Note: Child of Light saves data automatically at certain points. Do not switch off the power when the Child of Light logo for auto-saving is displayed in the corner of your screen.

Map Access Tip: In “Chapter 4: The Deep Dark Well”, when go to the Tree of Thorns, you’ll gain access to the world map. – The Map of Lemuria allows for rapid travel to previously visited locations. Open the Pause Menu to access the map.

Battle Starting Note: A battle is triggered when Aurora touches a dark creature.

Battle Tip: Finn is one of the best characters once you get magic that attacks all the enemies, it prevents them from attacking and takes a lot of HP.

Child of Light Walkthrough continues on Page 2 with Chapter 6: An Unexpected Reunion & Norah.