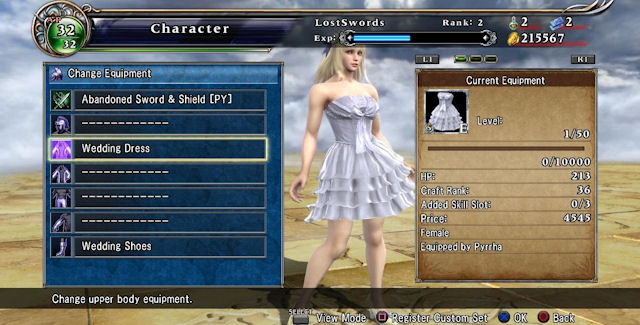 How To Unlock Pyrrha’s Wedding Dress

Pyrrha Alexandra can be unlocked by playing her Event Quest, once it gets released by Namco Bandai in May 2014 or later.

But aside from unlocking her character, by playing the Pyrrha Event Quest you’ll also get Treasure Boxes with items as your rewards for defeating enemies. The Pyrrah unlock quest includes items like a really rare Wedding Dress and matching Wedding Shoes.

Pyrra gets unlocked on Event Quest 8-3 when played on Very Hard difficulty to increase your chance to get a character unlock key to drop, as shown in this video guide:

Tip: To find out when to get everyone else unlocked in the game, check out our Soul Calibur: Lost Swords Unlockable Characters guide.

How To Receive A Free AP Recovery Potion & Continue Ticket

As a special gift from the SoulCalibur: Lost Swords development team, if you log in within the first four weeks after the launch in America & Europe on April 22 & 23, you’ll receive a set of bonus items as a thank you.

The bonus items you receive for logging into the game the first month after release is a free AP Recovery Potion and a Continue Ticket.

– AP System: The game is time-limited by a points system, which depletes every time you attempt a mission. Use this item to instantly continue playing without pause.
– Continue Ticket: The game allows you to continue after you die without losing your progress by using this item.

How To Receive The Triangle Bikini & More Bonus Items

From February 20, 2014 to May 20, 2014, if you buy “SoulCalibur II HD Online” in the PlayStation Store, you’ll receive a set of bonus items for use in SoulCalibur: Lost Swords.

Note: The Dragonic Armor set is also going to become available soon, although it’s not yet know when. It can be unlocked completing an upcoming special quest.

How To Earn Extra Friend Points

SoulCalibur: Lost Swords is single-player only and revolves around players making their way through a series of quests to gain items. These items can be accessories such as clothing options or new weapons to give your character extra flair or increased stats. These upgraded items will be essential as you tackle later quests.

Soulcalibur: Lost Swords isn’t a totally solo experience, though. Once players have outfitted their characters to their specifications, they can upload their character for other players to download and help assist in battles as an ally. The more you help out other players, the more Friend Points you will receive, allowing for added bonuses to be bought.

Most clothing items that make up the costumes in the game randomly appear when you get Treasure Boxes with items inside as your rewards for defeating enemies while completing Events. One example would be that the items you earn can result in new or plain wacky costumes you unlock for Siegfried either wear normal clothing or dress up with a panda hat and eagle helmet.

That said, Bandai Namco might release the default costume (that you know and love) for each character as paid DLC costume in the future. — It’s the downside of having a free-to-play games model where your character starts out naked without costumes to wear, it’s a slow progress as you level up unless you buy items through microtransactions built into the game.

Where to find more weapons:
– Everyone usually gets a rare weapon in the game’s Tutorial.
– To get more R-quality swords play the mid-game Quests.
– Then play the three sets of fights in the Epilogue (the ones with 9 AP & 3 fighters), which should award you rank 1 or 2 weapons of N, HN & R quality. Each set of fights award weapons for 1 default character and 1 extra character.
– For future reference, in the case of the quest that gives Sophitia weapons, it will also award characters like Nightmare weapons in HN most of the time.

Tip: You can obtain better items during Soul Burst/Break. Fulfill certain conditions to cause a Soul Break to destroy the enemies’ armor. This increases the chances that that enemy will drop even better equipment! Once you have a rare drop, make sure to max out a rare weapons to be able to beat hard difficulty mode in the game.

Do you know of any Soul Calibur: Lost Swords cheats or unlockables?
Let us know in the comments, you’ll get credit for finding out. – Thanks for visiting!