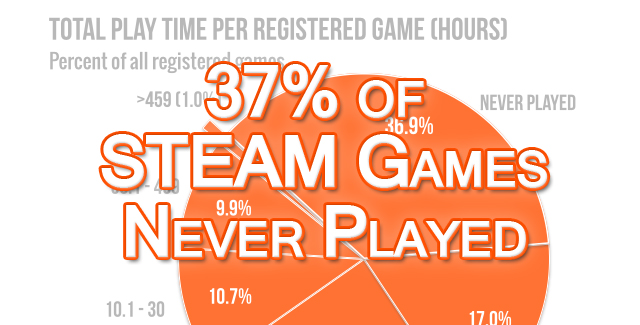 And now for a story many gamers can identify with! A new report states: 37% of purchased Steam games are never – ever – played.

Oh yes, I am part of that statistic, probably an outlier. Always intending to play them when they are purchased but then… Usually a better game comes out and sucks up all my free time, or I have a pressing need to binge-watch S01 of Elementary (I totally called Moriarty). Honestly, the only thing I find astonishing about this statistic is how low it is.

I think Steam is full of over achievers! Those proactive game-buyers are making the rest of us look bad. I probably have more games in my library than them, yeah that must be it. I’m not a procrastinator. Just checked the wiki on ‘procrastination’ (which I spelled right the first time) where it is noted that: In a 1984 (ancient, I know) study of academic procrastination, 46% of subjects reported that they “always” or “nearly always” procrastinate on writing a paper, while approximately 30% procrastinate on studying for exams or on reading for weekly assignments.

So it seems, surprisingly enough, video gamers are very much like the general population: most of us a guilty of it, some more than others. I know, I’m shocked. Data for the recent report was collected by Ars Technica, using 172 million Steam community IDs for a period of two months. 36.9% of purchased games have never been loaded, while another 17% have been played for less than an hour. Yep, that all sounds pretty familiar to me, and the study uses Holmesian Deductive Reasoning…

No. It’s pretty obvious the main reason why so many of these games are bought and then never played: the deals. If I pay upwards of $60 on a game I am going to play it come hell or high water. If I pay less than $6 for a game I don’t feel any guilt for ‘getting to it later’, whether or not that ‘later’ time actually comes. Steam is a wonderful platform with a plethora of affordable games, perfect for gamers on a budget. Duh.

So basically, this report is likely an effort on Valve Corp’s part to brag about how numerous and affordable their games are. ‘Oh dear, how terribly perplexing, we seem to have so many games at such great prices, our customers can’t seem to keep up with their own purchases!’ I’m onto you Valve, that’s why I’m writing this article that advertises and perpetuates your software’s good reputation! Wait…

Oh no! They’ve gotten to me, I’m caught in their web of manipulation! Ahem. The whole report is relatively interesting, it also reveals Steam’s most popular games from sales and gameplay data for every Steam game. DOTA 2 and Team Fortress 2 take the top spots, followed by Half-Life 2: Lost Coast, Counter-Strike: Source, and Half-Life 2: Deathmatch. I noticed that both Half-Life 2 games had more players combined than Team Fortress 2.

BUT! Both Half-Life 2 games have the highest numbers of games owned but are not played! Wow, this is a really fun and completely useless study. People who like statistics and pie charts about totally unimportant information should really check the study out at: ARS Technica’s site. Now that I’ve done my netcitizen civic duty, I have some long ago purchased Humble Bundle indie games to check out.

So, how about you? Are you the type to buy and forget or do you at least try every game you buy? Are you a serial procrastinator? Or maybe you’re waiting for the Steam Box? Let me know down in the comments below.

How many games do you own on Steam? And which have you played?