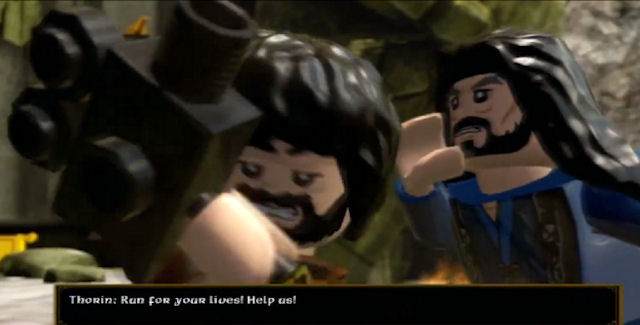 Let’s take a look at some funny Lego The Hobbit easter eggs! They can be found if you know where to look! 🙂

Easter eggs have been confirmed for Lego The Hobbit. Watch footage of them all below.

The Lord of the Rings & The Hobbit movie trilogy’s director Peter Jackson walks by with his movie camera in a cutscene at the end of “Level 1: Greatest Kingdom in Middle-earth”.

A Dubstep remix song plays when you activate the Carnival Red Brick cheat anywhere in the game. The Red Brick turns the game world into a dance club with disco lights everywhere, complete with a Dubstep song playing the remixed dialogues from the movie. Yes, really! 😆

Note: To unlock this Carnival Red Brick cheat, you have to have the blacksmith make the Mithril Skeleton Crank (the design for it is in the Troll Hoard level) and give it to quest-giver near Radagast’s House.

Watch the dubstep remix song and disco lights in action in the Middle-earth overworld:

Lord of the Dance Easter Egg

The “Lord of the Prance” is an achievement/trophy you can unlock in the Xbox/PlayStation/PC versions of the game. It’s a funny Lord of the Dance musical reference!

You unlock the “Lord of the Prance” achievement/trophy if you “Equip yourself with Dazzle Wig, Mithril Rhythm Stick and Mithril Dance Boots.”

See how to become the Lord of the Prance in this requirements video:

Discoveries made by Metral & Brian.

Have you found any Lego The Hobbit easter eggs?