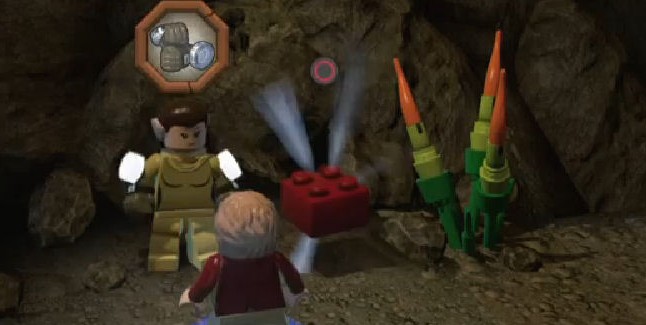 Our Lego The Hobbit Red Bricks Locations Guide shows you how to find and/or unlock all 32 Red Brick locations in Lego The Hobbit on the Xbox 360, PS3, PC, Wii U, Xbox One, PS4, PS Vita & 3DS game.

Where To Find Red Bricks: All Lego The Hobbit Red Bricks are found in the Middle-earth open world hub, not in levels. Red bricks are only in the overworld – some come as rewards in sidequests (called Fetch Quests) and others require specific actions only certain characters can perform. So in some cases you’ll need to use our “Lego The Hobbit Blacksmith Designs Locations Guide” to build the required Mithril item at the Blacksmith in Bree to then give to the quest-giver. – Once you attain a Red Brick, you still need to pay studs to be able to use the Red Brick cheat. All unlocking methods are listed below.

Here’s how to find, unlock & buy Red Bricks in this guide for Lego The Hobbit.

Tip: Some of them will require you to complete quests in the vicinity to open up the red brick quest.

Where to find all Red Bricks in Lego The Hobbit? The in-game collectibles locations for the Red Bricks are described in this detailed video guide with handy voice-over tips.

Take the following steps to unlock each one; where available…

Description: This first Red Brick is called “Studs Score Multiplier x2”. This and the other four Stud multipliers are very handy to turn on at the same time at the start of your game, because you’ll make your Stud counter number go up and up and up, so you’ll always have enough Studs to buy characters, as well as easily get “Master Burglar” studs requirement status at the end of each level for ‘finding’ many studs per level.

Location: You have to have the blacksmith make the Mithril Flail item from the schematic, and give it to the Hobbit from the “A Flail of a Time” quest. Find the Hobbit on the far north side of Hobbiton.

Where exactly to find the Studs x2 Red Brick: The Mithril Flail blacksmith design/schematic is hiding in “Level 6: Over Hill and Under Hill”.

It’s shown in this video guide with in-game directions where to buy the red brick at.

Location: You have to have the blacksmith make the Mithril Shadow Blade and bring it to the guy in Hobbiton who gives you the “Dual Wielding” quest, to get himself a shadow ally in battle. On the map he can be found east of Rivendell, by setting “Dual Wielding” as your destination and traveling there through the The High Pass.

Where exactly to find the Studs x4 Red Brick: It’s shown in this video guide with in-game directions where to buy the red brick at.

Location: You have to have the blacksmith make the Mithril Construction Hat and bring it to the Orc in Moria who gives you the “Build Day” quest. On the map he can be found east of Moria, by setting “Build Day” as your destination and traveling there.

Where exactly to find the Studs x6 Red Brick: It’s shown in this video guide with in-game directions where to buy the red brick at.

Description: This fourth Red Brick is called “Minikit Detector” because it indicates with on-screen arrows where exactly the Minikits are located in the game.

Location: You have to have the blacksmith make the Mithril Bandit Gloves and give it to the woman who gave you the “Spoils of War” quest, she needs it for her sister who serves in Thranduil’s guard. On the map look between the words Rivendell, Erebor & Esgaroth to find a deserted area near the mountains. Set the “Spoils of War” as your destination, and get to her by traveling through Thranduil’s Kingdom.

Where exactly to find the Minikit Detector Red Brick: It’s shown in this video guide with in-game directions where to buy the red brick at.

Description: This fifth Red Brick is called “Carnival” because it turns the game world into a dance club with disco lights everywhere, complete with a Dubstep song playing the remixed dialogues from the movie. Yes, really, it’s brilliant!

Location: You have to have the blacksmith make the Mithril Skeleton Crank (the design for it is in the Troll Hoard level) and give it to quest-giver near Radagast’s House.

Price: The cost to buy this Red Brick is ? studs.

Video: Watch the dubstep remix song and disco lights in action in the Middle-earth overworld:

Thanks for the unlock guide videos to PS4Trophies & Shirrako. Credit for additional tips to Mike.

If you have any questions or Red Brick tips please post them below! Thanks!