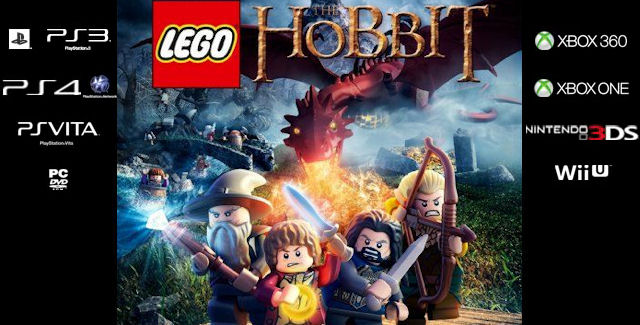 Our Lego The Hobbit walkthrough will guide you through the beginning to ending moments of gameplay with strategy tips for this action-adventure on the PS3, Xbox 360, Wii U, PC, Xbox One & PS4. The game’s also available on PS Vita & 3DS.

Gather your courage and embark on an epic fantasy LEGO adventure through the darkest forests and deepest caves of Middle-earth! The Lego The Hobbit videogame features all of your favorite characters from the first two films in The Hobbit Trilogy in LEGO form, including Bilbo, Gandalf, and the Dwarves of Erebor.

Let’s start the Lego The Hobbit walkthrough with an introduction video!

Lego The Hobbit is rated PEGI 7 in Europe & ESRB E10+ in America for everyone 7 to 10 years or older. This game includes Cartoon Violence, Comic Mischief.

From the makers of the immensely popular LEGO The Lord of the Rings, comes LEGO The Hobbit, inspired by the first two films in The Hobbit Trilogy: The Hobbit: An Unexpected Journey and the upcoming The Hobbit: Desolation of Smaug, productions of New Line Cinema and Metro-Goldwyn-Mayer Pictures (MGM) as well as the collection of LEGO The Hobbit constructions sets.

The interactive game of LEGO The Hobbit allows gamers to play along with their favorite scenes from the films, and follows the Hobbit Bilbo Baggins as he is recruited by the Wizard Gandalf to aid Thorin Oakenshield and his Company of Dwarves.

Bilbo leaves the comforts of the Shire on a journey through Middle-earth to help the Dwarves reclaim their lost Kingdom of Erebor within the Lonely Mountain. Along the way, he is introduced to ravenous Trolls, dangerous Orcs and, of course, Gollum and his precious Ring. Players will utilize and combine the Dwarves’ unique abilities – often with hilarious results – to solve the most diverse Quests of any LEGO videogame to date.

Question: How do I find the location of a character, brick or any other item I want to collect/unlock?

Answer: We get asked many variations of this question on the walkthrough page for each Lego game. That’s why, especially for YOUR questions, we have made HUGE guide pages to answer how you can get all unlockable characters and every type of collectible. Please look at the “Index of Lego The Hobbit Guides” list at the top of this page to choose where to click to get help.

On those pages (linked to from the “Index of Lego The Hobbit Guides” list above) we show you in-game video guides that have voice-over tips and accompanying text that reveals every little detail. You can find everything you need to get 100% in Lego Lord of the Rings on this website’s pages. So please have a look around and enjoy yourself. 🙂

Question: What are the new features in Lego The Hobbit?

Question: How does the open world HUB work?

Answer: The HUB is much bigger than in the past, with the addition of HUB interiors where the player can now actually go inside Hobbit houses, find secret tombs, cellars and even navigate through long lost Elven and Dwarven ruins.

There are also more hidden treasure items implemented. There is a whole new set of bizarre and wonderful items to hunt down in the levels surrounding the game. The items can be used to enhance abilities and are the key to unlocking new quests in our new quest chain system.

Question: What does the new LOOT do?

Answer: The addition of “loot” in Lego The Hobbit will also mean that you can craft new items in the Blacksmith by mining hidden LEGO Ore found around Middle-earth and in story events. Orcs, Goblins and Wargs also carry loot items that can drop when they are defeated and can be used later in the Blacksmith forge to make a brand new Mithril Weapon. Get good at forging and you may even be able to forge “perfect” items that glimmer and shine to show their true craftsmanship.

Question: How can you change the game’s time for night to day & viceversa?

Answer: Find a campfire on the map. The campfires don’t show up until you reach the level with the forest elves. -Thanks for the tips to Marisa & Andreapappa.

Question: Where in the game can you create custom characters?

Answer: This video guide shows the in-game location of the character creator in Lake-town.

Question: Where in the game can you create custom ride-able creatures?

Answer: This video guide shows the in-game location of the creature creator at Beorn’s Homestead.

Question: Where do the character voices & music come from?

Answer: The orchestral music and voice-acting in the Lego The Hobbit video game all comes straight from the first two movies of the Hobbit Trilogy. The game uses the original soundtrack and actor’s voices. Although, because of the serious tone of the movies, the game creators have add a lot of (often silent) slap-stick comedy and certain movie scenes have been changed by adding humor to be more family friendly for players.

Welcome to the fantastic Lego The Hobbit walkthrough! Brian will be your guide with voice-over commentary tips who shows you around the game’s awesome levels.

Thorin’s 13 team up for a hilarious and exciting adventure toward the Dwarven Kingdom of Erebor. Grab a buddy and prepare to trek across Middle-earth. Lego The Hobbit takes teamwork to a whole new level, allowing players to “buddy-up” as Thorin Oakenshield and the Company of Dwarves plus one Hobbit, as together they can perform new abilities and special attack moves.

Level 1 Intro: The adventure began long ago in a land far away to the east. There was the city of Dale, peaceful and prosperous. For this city lay before the doors of the greatest kingdom in Middle-earth, Erebor. It was the stronghold of the mightiest of the dwarf lords Thror, King under the Mountain.

Saving Tip: Use a Save Statue if you need a rest. Press the action button/key to activate it. Press B on Xbox, Circle on PlayStation, or A on Wii U.

Level 2 Intro: The Hobbit is a curious creature; brave and resilient, yet undeniably a creature of comfort. It is here at The Shire that we begin our tale of Bilbo Baggins of Bag End.

Level 3 Intro: After a long journey through The Shire and beyond, Bilbo and Gandalf the Grey caught up to the company of Dwarves. Their adventure was about to begin…

Level 4 Intro: The company took shelter for the night in the deserted ruins of a farm. Why this farm was deserted, seemingly in great haste, proved a mystery. However, it was certainly no small thing that destroyed the farmhouse.

Level 5 Intro: The wisdom of Gandalf is seldom incorrect, and surely enough the company stumbled across the Trolls’ hoard. In this hidden trove of goods, stolen from unwary adventurers and raided caravans, who knew what wonders may be found?

Lego The Hobbit Walkthrough continues on Page 2 with Level 6: Over Hill and Under Hill.