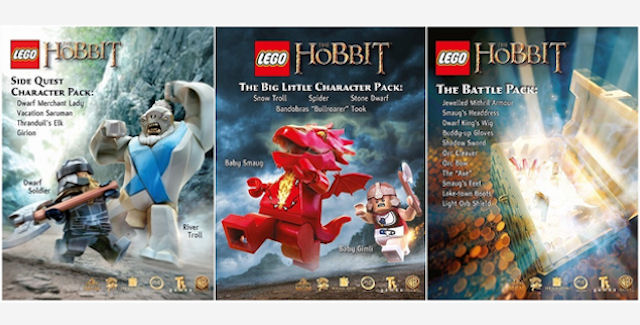 Note that you can keep earning Achievements or Trophies for this game while using cheats. The game’s creators have always said it’s all about having fun with Legos and cheats are part of that fun. Take a look at the cheats below…

Cheat Activation Tip: To turn on cheat codes, you first have to be in-game. Next, during gameplay press pause. Like in every Lego game you can enter codes from the Main Menu by selecting “Extras” Options and then “Enter Code”. After which you can activate the Lego The Hobbit cheat you want. Remember that the next time you play the game, you’ll have to activate the cheats again.

Included in the box of the The Hobbit: The Desolation of Smaug Blu-ray and DVD was a special code to unlock Sauron in-game, and there are 25 more character cheats…

This video shows how to enter cheats in the Lego The Hobbit game with examples.

The Xbox 360, Xbox One, PS3 and PS4 versions of the Lego The Hobbit are the only ones that get downloadable content (DLC) after launch as paid DLC in the near-future.

Once downloaded onto your console, the new characters will appear in the bottom row of the game’s character select screen.

Unlockable The Hobbit: There and Back Again DLC Levels

So during the third movie’s release week on December 17th, 2014, keep your eyes on the Xbox Marketplace, PlayStation Network, Nintendo eShop & Steam online stores to download the new chapters from “The Hobbit: There and Back Again” into Lego The Hobbit video game.

Warner Bros. Games and TT Games have officially announced this by saying: “And if you want more, additional adventures will be available in the future for The Hobbit: There and Back Again!”
So look forward to a download pack that add new story levels to the game so it covers the whole Hobbit trilogy.

Do you know of any Lego The Hobbit cheats or unlockables?
Let us know in the comments, you’ll get credit for finding out. – Thanks for visiting!