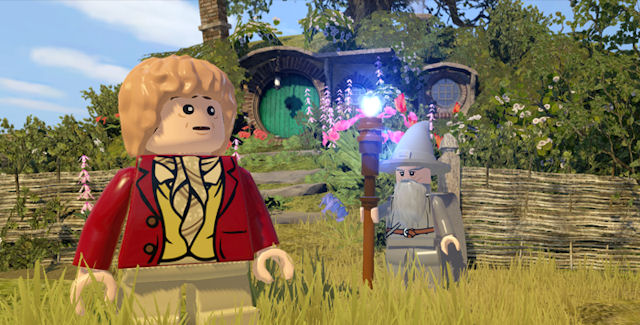 The Lego The Hobbit achievements guide lists every achievement for this Xbox 360, Xbox One & PC action-adventure game and tells you how to get and unlock them.

In the Lego The Hobbit achievement guide we’ll show there are 39 Achievements (0 Secret Achievements) with a total of 1,000 Gamerscore points to earn in the Xbox 360, Xbox One and PC versions.

3. Slunk back from whence he came (25G) — Completed “Azog the Defiler”

13. He is summoning his servants (25G) — Completed “Looking for Proof”

17. Ever “The People’s Champion” (20G) — Completed all the quests in Middle-earth

18. The greed of Dwarves (25G) — Collected all Mithril Bricks

Tip: To find them all, check out our Lego The Hobbit Mithril Bricks Locations Guide.

19. Labouring in the villages of Men (25G) — Collected all Schematics

Tip: To find all 32 Schematics, check out our Lego The Hobbit Blacksmith Designs Locations Guide.

20. Doilies and your mother’s dishes (20G) — Collected all Treasure Items in levels

Tip: To find all 64, check out our Lego The Hobbit Treasure Items Locations Guide.

22. Unequalled skill of the Dwarves (25G) — Forged all the Perfect Mithril Treasure Items

Unlocking Tip: The Bonus Level becomes available after you have completed the 16 story levels of the game.

Location: On your map go to Erebor and climb the Lonely Mountain until you reach the Stone Giants flag to enter the level.

Take a look at the video guide to see how to get there and complete it in well under 5 minutes.

Location: A good spot to mine lots is in the Trollshaws forest you walk through after “Level 4: Roast Mutton” when you go to “Level 5: The Troll Hoard”. Keep re-entering this area to make the mining mineral spots re-appear.

Tip: The mining game appears when you walk up to a shining grey-colored mineral sticking out of the ground, at which point you’ll be prompted by the game to hack into the mineral with the on-screen action button. You’ll perfectly complete each mining mini-game by hitting the action button at the exact moment the arrow is moving in the middle of the on-screen gauge. Keep doing this until you’ve finished the minining mini-game 50 times over.

Take a look at the video guide to see how to perfectly mine.

33. Dawn of the Mushroom King (25G) — Equipped Thorin with the Mithril Mushroom Crown

36. Quite a merry gathering (25G) — Collected all characters

Tip: To find the around 100 characters in the game, check out our How To Unlock All Lego The Hobbit Characters Guide.

Tip: To find all 160, check out our Lego The Hobbit Minikits Locations Guide.

Location: Travel to Beorn’s Homestead in Dolguldur. You can set Beorn himself as your destination on the map, he’s just outside his home, where you can buy him for 45,000 studs.

Beorn Transformation Tip: Once you’ve selected him from the in-game character select screen, stand still and press the B button on Xbox / Circle button on PlayStation / A button on Wii U to transform into a bear.

This video guide shows how to change into Beorn’s beast form:

This video guide shows the in-game location of the custom character creator in Lake-town.

Please comment if you have any Lego The Hobbit achievement unlock tips of your own. Kudos will be given. – Thanks for visiting!