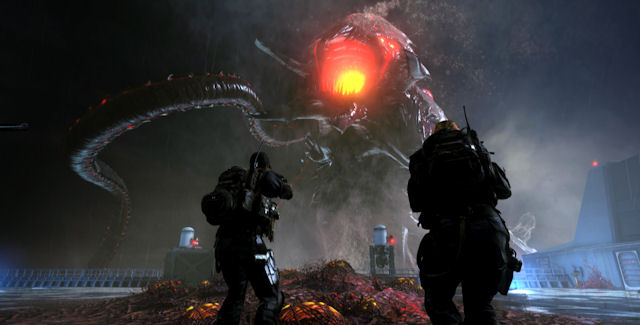 In Episode 2: Mayday, the Quick Reaction Force team is sent in to investigate a high-tech ghost ship adrift in the South Pacific. To deal with the insidious wall-crawling “Seeder” and skyscraper-sized monstrosity known as the “Kraken,” your team will need new tactics and new weapons.

You unlock it if you meet these requirements: “Complete all Challenges and kill the Kraken in Mayday in Regular or Hardcore difficulty.”

Tip: Make sure to work as a team (sounds obvious but still!) do not play with randomers as they probably won’t help or screw the challenges up.

Note: If you don’t get the difficult challenges early in the game, then it’s recommended you restart it, as the last thing you need is the harder challenges when you are surrounded by aliens.

Steps To Completing All Challenges:

STEP 1: Completing all challenges and beating the Kraken boss alien in an Xbox One solo playthrough. This video guide will show how to build Venom-X (Acid) and Venom-FX (Fire aka Orange), Sticky Flare, Pipe Bomb, Hypno trap and Tesla trap. Showing where to find the new gun Ripper, schematics and most parts from boxes to buildables.

This video guide gives a step-by-step playthrough of the sequence of events that you’ll need to do, in order to finish all challenges.

STEP 2: The next steps will show how to protect the gas valves and how to kill Kraken with a Relic on in solo regular difficulty mode and escape.

The end of part 2 of 4. 2 future Extinction episodes on the way this year.

Big thanks to RelaxingEnd for the guide tips!

Have you unlocked the “Mayday Completionist” yet?