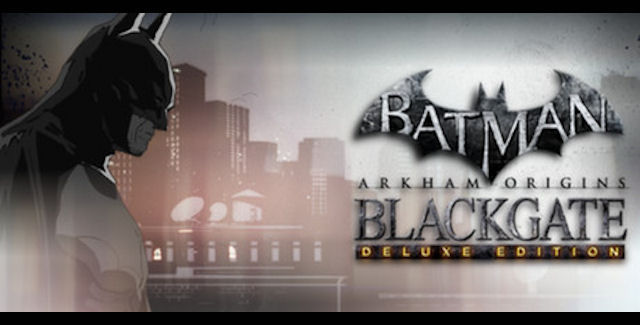 The Batman: Arkham Origins Blackgate Deluxe Edition walkthrough will guide you through the beginning to ending moments of gameplay with strategy tips for this action-adventure on the Xbox 360, PS3, PC, Wii U, 3DS & PS Vita.

Please note that viewers must be at least 13-16 to watch, in America & Europe respectively, so no harm comes to those with innocent eyes. This game includes Blood, Mild Language, Mild Suggestive, Themes, Use of Tobacco, Violence.

Blackgate Prison is under new management.

In Batman: Arkham Origins Blackgate – Deluxe Edition, a series of gang-fueled uprisings occur within the walls of Blackgate Prison. Batman is called in to restore order and put an end to the rebellion before the chaos implodes.

As the story progresses, players will explore deep inside the bowels of this remote island penitentiary and discover what happened after the events of Batman: Arkham Origins and learn more details of the Dark Knight’s past.

Tip: In addition to all previous released suits, players will be able to unlock the exclusive Zero Year Batsuit skin by registering for or signing into a Warner Bros. ID (WBID) account.

Fans will be able to download the game beginning April 1 on the PlayStation Network, Xbox Live Marketplace, Nintendo eShop, and Steam for $19.99.

The Penguin, Black Mask, and the Joker have taken over three distinct parts of Blackgate. Who should you take on first? The game’s creators decided to leave that up to you.

When you arrive at Blackgate Prison, you’re immediately given the choice of going to the three areas, and while there will be some back-and-forth between the different areas to find everything you need to proceed, the order that you encounter the three big bosses is your choice.

Blackgate Prison is split up into three areas — Administration, Industrial, and the Cell Blocks. Batman has the larger missions of freeing hostages in the innards of Blackgate prison, but he first needs to solve the immediate crisis the villains inside are causing.

In the third area of Blackgate Prison, Black Mask has taken over the Industrial portion of the prison and is overloading the generators.

This video walks you through the beginning of this area, letting you know about Black Mask, what you need to proceed, and it touches upon the core of any Metroidvania-based game — item-based progression. In this case, Batman will end up unable to proceed unless he can find a way to physically break through barriers, which means that he has to explore the prison for some WayneTech equipment to get around the problem. In this case, he is able to find an Explosive Gel Launcher, which is a small breaching device to fire small concussive gel rounds to be detonated at long range. At this point, previously inaccessible areas of the prison are opened up, which establishes the core game loop of the game — see problem, find gadget to solve problem, come back and solve it.

Welcome to the Batman: Arkham Origins Blackgate Deluxe Edition walkthrough! Rabid will be your voice-over commentator showing you around the game’s levels.