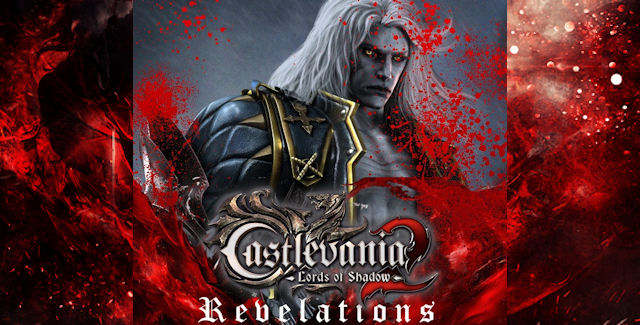 The Castlevania: Lords of Shadow 2 Revelations walkthrough will guide you through the beginning to ending moments of gameplay with strategy tips for this action-adventure game DLC on the PS3, Xbox 360 & PC.

Play as Alucard in this extensive add on for Castlevania: Lords of Shadow 2. The immersive story is expanded further as new branches of the plot are uncovered, along with rich new environments and challenging puzzles. Fight creatures of darkness and discover the true extent of Alucard’s involvement in Dracula’s story, his deal with death and his fight against Satan. Experience a whole new aspect of the thrilling conclusion to the ‘Lords of Shadow’ saga, including some enlightening revelations!

Let’s start the Castlevania: Lords of Shadow 2 Revelations walkthrough with an introduction video!

Please note that viewers must be at least 18 to watch, so no harm comes to those with innocent eyes. This game includes Violence.

Titled ‘Revelations’, the new downloadable content will be released on March 25 for Xbox Live Games on Demand and PlayStation Network and PC Steam, and follows fan-favorite Alucard as exclusive new branches of the immersive storyline are uncovered. Alucard, the turned son of Gabriel, has shunned human life for many years, choosing to hunt only creatures of the night. The DLC takes place just before the apocalyptic events of Castlevania: Lords of Shadow 2, where Alucard readies for his father’s return and the forthcoming battle against Satan. As the plot unfolds, it begins to reveal how the lone vampire is inextricably linked to his father’s fate.

‘Revelations’ takes place within the epic world seen in Castlevania: Lords of Shadow 2. Playing as Alucard, gamers must discover the legendary vampire’s secrets, unearth the true extent of his involvement in Dracula’s story, and set in motion the events of Castlevania: Lords of Shadow 2. The DLC expands the incredible story of the recently-released sequel, with the fate of the Belmont clan unveiled. Alucard has his own unique, powerful abilities, including use of the Glaciem and Igneas powers, in addition to vampiric abilities which allow him to transform into a wolf, a swarm of bats and even turn back time. Blood also fuels capabilities, as drinking the blood of enemies will intensify immortal powers.

Castlevania: Lords of Shadow 2’s sumptuous 3D world and epic quest are now enhanced and extended with all-new locations, and the chance to experience familiar ones, via the ‘Revelations’ DLC.

Welcome to the Castlevania: Lords of Shadow 2 Revelations walkthrough on Creature of the Night difficulty mode. Inferno will be your guide showing you around the game’s areas.

Warning: The ‘Revelations’ DLC reveals facts and spoilers concerning the story of the main game. It’s recommended that you finish the main adventure before playing this add-on DLC.

Trevor’s mother says there’s no time to waste, we must hurry and look for the Chaos power.

This is the “Return to Castlevania” chapter.

Get ready to use your new abilities in the final boss fight, this leads to the DLC’s ending.

Here is the final “Back to the Present” chapter.

Thanks to Konami & Inferno for the walkthrough videos.