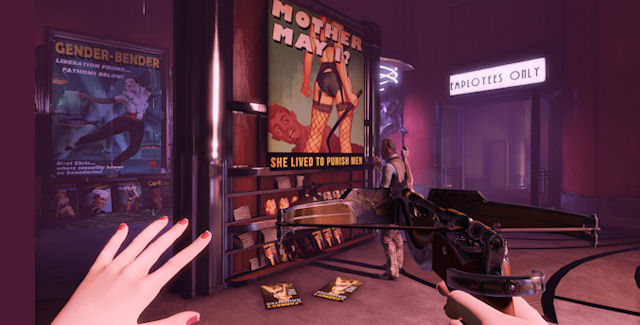 The BioShock Infinite: Burial at Sea Episode 2 trophies guide lists every trophy for this PS3 first-person shooter game DLC and tells you how to get and unlock them.

There are 10 Trophies (4 Hidden) that can be earned in the PS3 version. Earn Bronze (7) and Silver (3) Trophies to increase your Gamer Level.

1. The Whole Story (Silver) — Collected all Audio Diaries and Voxophones in Burial at Sea – Episode 2

Tip: Simply lockpick the 5 blue pins in the locked door Elevator area after Ryan’s Prep Anatomy, although there’s only 1, you can restart the checkpoint to respawn it five times. The game remembers your progress even if you do it in multiple playthroughs.

Tip: There will be point in the story where you come out of an elevator and there will be a bit of a gas cloud, which is your obvious hint. Then to the right there’s a group of three splicers ready for you to get. — What also works at any time is shooting a noisemaker, which will attract all enemies to it. Then shoot the gas to get them.

4. Glutton for Punishment (Bronze) — Used Ironsides to collect 20 rounds of ammo or more in Burial at Sea – Episode 2

5. Dead Drop (Bronze) — On three occasions, knocked out an enemy after silently dropping off a Freight Hook.

Controls Hint: The game is really sensitive as to what registers as this move. If you do it too quickly it seems not to register. Basically, you have to wait a second or two after landing before knocking them out.

6. Never Saw It Coming (Bronze) — While invisible, used Peeping Tom to knock out 15 enemies with a melee attack.

7. Up and Running (Bronze) — Repaired the machine in Suchong’s lab in Burial at Sea – Episode 2.

Note: 1998 Mode challenges gamers to complete the narrative using only non-lethal tools. This mode will be in addition to existing difficulty modes, and the hardest difficulty 1999 Mode. — 1998 Mode is also a reference to the year Ken Levine’s Thief stealth game was released.

Ken Levine, creative director of Irrational Games had this to say about the new difficulty mode: “In Burial at Sea – Episode Two we put a focus on balance and stealth mechanics. As we were developing this new style of gameplay, we started to see people self-impose non-lethal playthrough’s. Given the fan reception of 1999 Mode, we thought it would be cool to give them another way to play Burial at Sea that challenged their mastery of stealth tools.”

Please comment if you have any BioShock Infinite: Burial at Sea Episode 2 trophy unlock tips of your own. Kudos will be given. – Thanks for visiting!