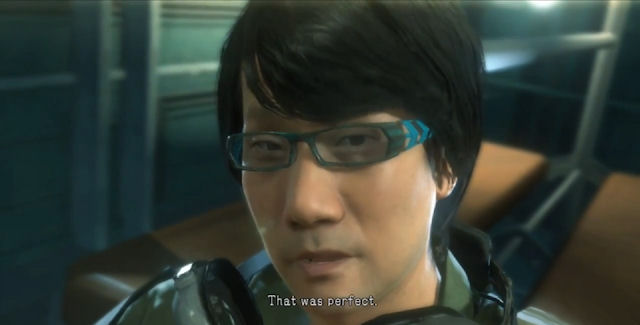 Easter eggs have been confirmed for Metal Gear Solid 5: Ground Zeroes. Watch footage of them all below.

After completing the “Ground Zeroes” Main Mission, you’ll unlock Side Ops missions. Go play the “Intel Operative Rescue” Side Ops and upon completion Big Boss finds out the Intel Team agent VIP he rescued is actually the Metal Gear series creator Hideo Kojima! 😀
– When you get rank A or lower he’ll say “What took you so long?”
– And if you get an S-rank he’ll congratulate you saying “That was perfect.”

After you’ve rescued Mr. Kojima-san, he’ll show up in your Main Menu’s “Mission Select” screen, as he’s riding the chopper together with Boss. If you do nothing for a while, he’ll mess with the mission select screen, basically trolling you to play your next mission already!

For PlayStation 3 and 4 players only. After you collect all 9 XOF patches and complete the game’s “Ground Zeroes” campaign, you will unlock the “Deja Vu” Extra Op mission featuring Solid Snake. This 1998 retro Metal Gear Solid 1 mission has multiple easter eggs, such as…

What happens when the FoxEngine powering Metal Gear Solid 5: Ground Zeroes gets infected with the deadly FoxDie retrovirus? Find out by interacting with two infected POWs in the “Deja Vu” Extra Op.

Miller calls you up on the radio to warn you because he’s a fan.

The guard soldier taking a dump on the outhouse toilet is a direct reference to the guarding having stomache trouble in the original Metal Gear Solid game.

You can unlock the Classic Grey Fox skin AKA The Cyborg Ninja outfit to wear only in this “Deja Vu” level. Unlock it by answering all the questions correctly at the end of the level when you complete it on Hard difficulty mode. And you get the Classic Snake skin to wear in this level if you answer all the questions correctly on any difficulty mode.

The rewards message at the end of the quiz will read: “The Cyborg Ninja outfit has been unlocked for the “Deja-Vu”” Extra Op. It can be selected after choosing this mission from the Mission Select Menu.

You also get to see the classic “Tactical Espionage Action: Metal Gear Solid” logo at the start of this mission, after which Boss says “Kept you wait, huh?” But that’s not all, the same classic red logo appears in a locked cabin as well, which disappear when you shine the AM MRS-4 RIFLE (SL) weapon’s light on it (which you can find right below the first logo). They include logos from all Metal Gear Solid games including Metal Gear Rising and some Kojima Productions developer logos too. Variations of these logos are in the Xbox version’s “Jamais Vu” Extra Op mission as well.

The video will show you the Metal Gear Solid 5 logo locations guide. For finding them all you’ll get a hidden message from Hideo Kojima himself saying: “Thank you for all your support!”

Here’s a funny easter egg you’ll come across when you make a radio call in the game!