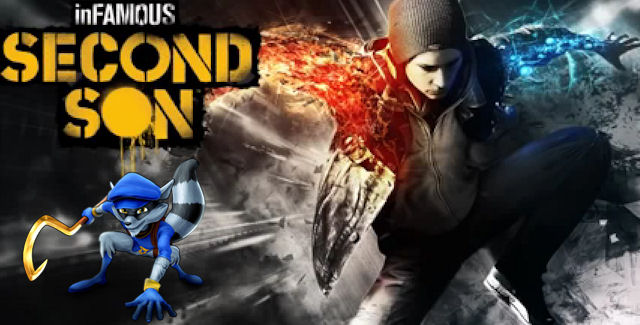 Let’s take a look at some nostalgic Infamous Second Son easter eggs! They can be found if you know where to look! 🙂

Easter eggs have been confirmed for Infamous Second Son. Watch footage of them all below.

You can find the “Cole McG” stores all over the city.

Additionally, here’s a “Call The D.U.P.” promotional message from the game, warning against Bio-terrorists such as the infamous Cole MacGrath.

Whenever you 100% free a district from D.U.P. forces, you will unlock a different design to wear on the back of Delsin’s vest. One of the vests you can unlock is “Zeke’s Lucky 7” vest.

Infamous developer Sucker Punch Productions’ other franchise, Sly Cooper, always makes an appearance in the Infamous games. You can find a Sly Cooper button on the front of Delsin Rowe’s vest! It’s similar to the Sly symbol on Cole’s backpack in Infamous 1 & 2.

Next, here’s a “Panda King” Burget King spoof reference from the Sly series.

Additionally, here’s a Sly Cooper and his thieves gang drawings on the walls of the city.

Have you found any Infamous Second Son easter eggs?