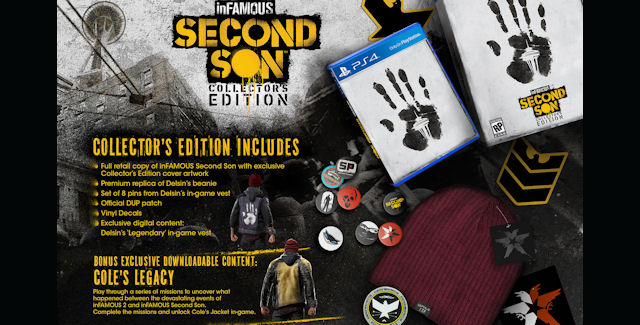 How To Unlock Extra Vests

In-game Vests Unlocking Method: Whenever you 100% free each of the 8 districts from D.U.P. forces, you will unlock a different design to wear on the back of Delsin’s vest. — For example: One of the 8 vests you can unlock is “Zeke’s Lucky 7” vest.

How To Unlock the Cole’s Legacy Storyline: If you pre-order Infamous Second Son, you’ll receive the “Cole’s Legacy Content Pack” as a free bonus. And if you weren’t on time to pre-order it, the Special Edition of the game comes with a “Legacy of Cole” DLC code as well. – If you’re not in a hurry to play it, it’ll also become available as paid DLC sometime after launch.

It’s described as: “Explore the events immediately following Infamous 2 to find out what happened to the lead character Cole from the first two Infamous games. Work with an investigative reporter to understand the source of conduit powers. — 4 story missions, approximately 1 hour of gameplay.” And as mentioned above, upon completion of these missions you’ll unlock “Cole’s Jacket”.

How To Unlock the Infamous Paper Trail Storyline: These are 19 free bonus missions and exclusive web content that gets unlocked when you connect your PlayStation 4 online and start playing Infamous Second Son, at which point you’ll be asked to download the game’s first patch. This 300MB patch includes the bonus missions.

It’s described as: “Manga and murder, follow the trail of paper origami doves (Heavy Rain reference?) to discover the full story behind the D.U.P.’s occupation of Seattle. You will pursue missions to unravel the mysteries behind the D.U.P. and the cover-up of a violent suicide through this time-released story. New content will be released every week for the first six weeks after launch of the game. Paper Trail is available about one third of the way through inFAMOUS Second Son. Paper Trail missions will be marked on your map.

This is an innovative online and in-game story arc co-developed by Sucker Punch and 42 Entertainment. — 19 story missions and corresponding web-based investigations, approximately 5 hours of unique gameplay.”

Do you know of any Infamous Second Son cheats or unlockables?
Let us know in the comments, you’ll get credit for finding out. – Thanks for visiting!