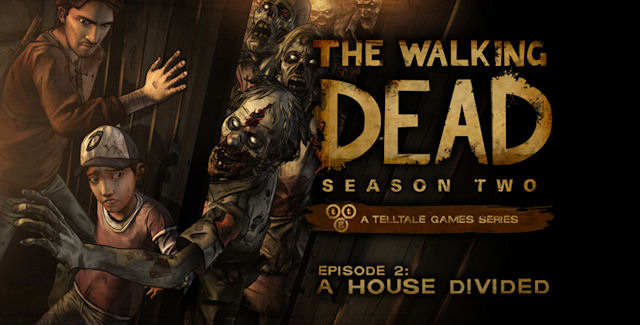 Our The Walking Dead Game: Season 2 Episode 2 walkthrough will guide you through the beginning to ending moments of gameplay with strategy tips for this survival-horror graphic adventure on the PC, Mac, Xbox 360, PS3, PS Vita & iOS devices.

Watch the full Episode 2 being livestreamed by Doug right after launch here (with Nick saved):

Telltale Games is back for Season 2! This second part is called “The Walking Dead: Season 2 – Episode 2: A House Divided”. The group is forced to flee into the woods after the cabin is visited by Carver, who threatens to harm them. Clementine finds someone from her past.

Welcome to the The Walking Dead Game: Season 2 Episode 2 walkthrough! Doug will be your voice-over commentator showing you around the game’s areas.

Chapter 1 Objective: Helped someone through a difficult time.

Chapter 2 Objective: Talked to a stranger.

Chapter 4: Over the Bridge

Chapter 4 Objective: Found a way across the water in the woods.