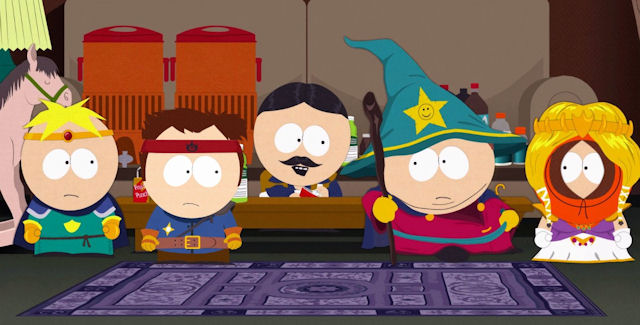 The South Park: The Stick of Truth trophies guide lists every trophy for this PS3 RPG game and tells you how to get and unlock them.

In the South Park: The Stick of Truth trophy guide we’ll show there are 51 Trophies (11 Hidden) that can be earned in the PS3 version. Earn Bronze (42), Silver (5), Gold (3), and Platinum (1) Trophies to increase your Gamer Level.

Index of South Park: The Stick of Truth Guides:

Tip: At the end of the first day — right after the bard fight — Cartman will make you a member of Kool Kids Klub (not to be confused with that other club with the same initials!). It’ll unlock as you take on the epic quest that follows after, called “go home”.

Note: This can be unlocked after you escape the UFO at the end of day one.

4. Gingivitis (Bronze) — Gingers have bitten you 3 times without you blocking.

Note: Missable trophy!
Location: This can be unlocked inside the South Park Elementary school, where you get the quest to save Craig from detention. There you’ll encounter Gingers, and simply do not block their attacks until the trophy pops up!

Note: Missable trophy!
Location: This can be unlocked inside the South Park Elementary school, where you get the quest to save Craig from detention. There you’ll need to get the wearable freckles from one of previously mentioned Gingers or from one of the lockers in the school. Then during the quest, after acquiring the golden key from Mr. Mackey’s office, you’ll encounter the Boss Hall Monitor. During the battle against him, you’ll be able to select the freckles from your Inventory, under Make-up.

6. Made This for You (Bronze) — You flung a turd of your own creation at an enemy.

Tip: To make a turd you must (logically) go into a bathroom toilet and repeatedly keep pressing on the X button until a turd falls into the toilet bowl. Pick it up from the bowl to add it to your Inventory. To use the turd in battle, during battle go to the Healing Item option and select the turd, then select the enemy to throw the turd at.

Requirement: When you begin the game, you’ll need to select the Jew Class for fighting.
Bonus: No matter your class, finding Jesus in this way will unlock the powerful Summon item ability!

Start the “Find Jesus” quest by talking to Priest Maxi, who’s on the park bench left of South Park City Hall, at about 10-20 minutes into the game. Then go to the church to find Jesus playing peek-a-boo among the church benches, find him twice. After that go back to talk to Priest Maxi and he’ll tell you to go back again. Go back to the church and re-arrange the two lights to point to the holy cross in the middle, and finally flip the light switch on the right side of the wall to off. Walk up behind the speaker pedestal where the shade’s coming from… You found Jesus!

8. Parkeologist (Bronze) — You opened all of the garages in South Park.

9. For the Hoarder (Bronze) — You completed the game without selling any items.

Note: Missable achievement! Be sure to fart on the Prime Minister during the “O Canada” quest or you’ll miss out on your one chance to get it.

Fart Button Combination Tip: To fart, press R1 on PS3 / RB on Xbox 360 and then pull the right analog stick down and then up.

11. Irritable Bowels (Bronze) — You shat your pants during a boss battle.

Location: Can first be done during Jimmy boss fight in “The Bard” quest.

Shitting your pants happens when your green-colored mana bar overloads all the way. This happens when Jimmy the Bard attacks you three blast attacks in a row that you must NOT block!

12. Dog Whistle (Bronze) — You’ve farted on a dog while in gnome form.

13. Dragon Wrath (Bronze) — You knocked out 3 or more enemies with a single fart outside of battle.

14. Just Saying Hi (Bronze) — You’ve farted on every buddy in the game.

15. Re-Buttal (Bronze) — You interrupted 5 channel attacks by using a fart.

Location: Can be done for the first time during the South Park Elementary detention quest’s Hall Monitor boss fight. You can also try it in a fight against Underpants Gnomes.

Before you start the fight, make sure you have enough mana potions in your inventory. Mana is required to do a farting magic attack strong enough to interrupt the enemy while it’s concentrating to charge its channel attack (a process which gives you one move to interrupt it). For example, you can select the Dragon Shout farting attack (requires 40 mana) to interrupt the enemy each of the five times.

16. Heisenberg (Bronze) — You defeated the Meth Tweekers while wearing the Evil Cartman goatee and bald cap.

No, not Walter White. Nice Breaking Bad reference, though!
Can be done early on in the game. The video guide shows where to find the Evil Cartman goatee and the bald cap.

17. Shutout (Bronze) — You successfully blocked every enemy attack in a single (non-tutorial) battle.

18. Stay Down (Bronze) — You farted on 10 enemies in the world that were knocked out.

19. Avenger (Bronze) — You defeated 3 enemies in one battle while your buddy was knocked out.

20. No Child Left Behind (Bronze) — You completed the game and never ended a battle with your buddy knocked out.

Tip: Focus your character in combat the most on Cartman and Butters wherever possible. And even if one of your characters goes down, you can revive the character before the battle ends.
Note: If you do not download the day-one patch, then you’ll always unlock this at the end of the game.

Tip: To find all 30 Chinpokomon, check out our South Park: The Stick of Truth Chinpokomon Locations Guide.

Tip: To find all 120 friends, check out our South Park: The Stick of Truth Friends Locations Guide.

Tip: How do you fart on people? You can select your fart with R1 on PS3 / RB on Xbox 360 and then pull the right analog stick down and then up.

Protip: The easy way to do this is by farting on the same person 100 times in a row (instead of on 100 different people).

Protip: Doesn’t count when you fart on cows and half the rats you encounter. So the easy way to do this is by walking in front of the South Park City Hall to find the kitty and fart on that same kitty 25 times in a row (instead of on 25 different animals).

Tip: As mentioned in the “Irritable Bowels” section, you shit your pants by overloading your mana bar. For example, by taking mana potions to overfill your mana meter.

32. Shopaholic (Bronze) — You have collected half of the available costume sets.

33. Clothes Whore (Gold) — You’ve collected all of the available costumes.

34. Friends in Strange Places (Bronze) — You befriended both Crab People and Underpants Gnomes.

– Crab People location: Go down the manhole cover in the center of town (next to the “Men Working” sign) to take you into the sewer where the Crab Person lives. Follow the path until you reach a big rock blocking the way, use your parting farting ability to blow up the rock and reach the Crab Person to talk to it.

35. Weapon Proficiency (Bronze) — Over the course of the game, you’ve scored 100 perfect attacks.

36. Skilled Defender (Bronze) — Over the course of the game, you’ve blocked 100 attacks.

37. You bastards! (Bronze) — You’ve let Kenny die in combat 10 times over the course of the game.

Haha, classic South Park! Outside of the many ways Kenny can die, here’s the easiest method. When you’re playing as Princess Kenny, select his (her?) unicorn attack. When you’re prompted to perform a Quick-Time Event, miss it on purpose and you will have killed Kenny each time… you bastard! 😛

Tip: You can unlock this without foregoing the “No Child Left Behind” trophy that requires no buddy is knocked out by the end of a battle all game long. That’s because Kenny comes back to life after 2-3 turns, and of course like any buddy you can revive a knocked out Kenny before the battle ends.

38. Mastery (Bronze) — You’ve unlocked all of the upgrades for a New Kid ability.

Note: The easiest way to unlock this is to put each upgrade point towards a single ability until all 5 upgrade levels are unlocked.

40. Full Arsenal (Bronze) — You own all the weapons and costumes available in the game.

Tip: You can find all 153 using our South Park: The Stick of Truth Weapons and Costumes Locations Guide.

43. Nonconformist (Bronze) — You befriended the Goths, like everyone else playing this game.

44. Inside Joke (Bronze) — While inside Mr. Slave, you summoned Mr. Slave.

45. Acceptance (Bronze) — You accepted your fate and chose the name Douchebag yourself.

– How to be The Hasselhoff: Get the David Hasselhoff makeover costume at a cost of $175 at Tom’s Rhinoplasty.
– How to get the girl makeover disguise: In your Inventory under Body, make sure you have selected the Makeover Outfit, then under Hands the Makeover Accessory, next under Hair is the Makeover Wig, and finally under Makeup is the Makeover Makeup. Together these make you look like a girl.
– How to get Dire AIDS: Battle a Direwolf in Canada in the “O Canada” Quest — or visit Canada by going to the north-easter corner of the town map — to get it when you’re physically attacked by the Direwolf.

49. Perverted (Bronze) — You watched your parents have sex for 60 seconds.

Note: Missable trophy!
Location: Right after the “Attack the School” quest at South Park Elementary is finished, you’ll encounter your parents while you’re out too late. Your parents ground you and promptly send you to bed. When you’re at home in bed the “Defeat the Underpants Gnomes” quest will begin, where the Gnomes try to kill you for discovering them. After the battle you’ve shrunken down with their magic dust and you’re exploring the inside of your home’s walls, climb up until you see a small silver door to enter. This leads to your parents room where you must stand still for 1 minute.

Embarrassment Prevention Tip: Turn down the volume while watching or unlocking this trophy.

50. Stick Savior (Silver) — You defeated Princess Kenny and recovered the Stick of Truth.

51. Too Far (Bronze) — You farted on the corpse of an aborted Nazi Zombie fetus.

Location: These can be found in during fights in the “Recruit the Girls” mission, which takes place in the Unplanned Parenthood clinic.

Special thanks to Ubisoft & PS3Trophies for the list, tips & guide videos.

Please comment if you have any South Park: The Stick of Truth trophy unlock tips of your own. Kudos will be given. – Thanks for visiting!