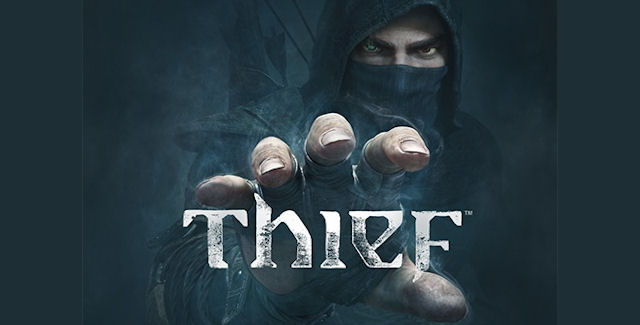 The 100% stealth Thief 2014 walkthrough will guide you through the beginning to ending moments of gameplay with strategy tips for this stealth-action game series reboot on the PC, Xbox 360, Xbox One, PS3 & PS4.

You are Garrett, the Master Thief. The City you once knew has changed. Your thieving skills are all you can trust as you walk the fine line between politics and the people, entangled in layers of conflict. With time running out, you’ll unravel a dark, personal secret from the past that ultimately threatens to tear your world apart. — Get ready to become the shadows. Become the Master Thief. Become Garrett.

Let’s start the Thief 2014 walkthrough with an introduction video!

Please note that viewers must be at least 16-18 to watch, depending on whether you live in Europe or America respectively, so no harm comes to those with innocent eyes. This game includes Blood, Nudity, Strong Language, Strong Sexual Content, Use of Drugs, Violence.

Garrett, the Master Thief, steps out of the shadows into the City. In this treacherous place, where the Baron’s Watch spreads a rising tide of fear and oppression, his skills are the only things he can trust. Even the most cautious citizens and their best-guarded possessions are not safe from his reach. As an uprising emerges, Garrett finds himself entangled in growing layers of conflict. Lead by Orion, the voice of the people, the tyrannized citizens will do everything they can to claim back the City from the Baron’s grasp. The revolution is inevitable. If Garrett doesn’t get involved, the streets will run red with blood and the City will tear itself apart.

Here’s a series of videos from the creators of the game that reveal more of the storyline.

Part 1: “Basso’s Gamble”.
In this first trailer of the Stories from The City series, witness what Basso has to say about The City as it goes through a time of death and gloom. Unlike many, he hasn’t lost hope just yet, as he knows a savior may be closer than they think…

Part 2: “The Queen of Beggars Sees All”.
Nobody knows how old the Queen of the Beggars actually is; rumour has it she’s as old as The City itself. Some say that although she is blind, she sees through the eyes of rats that riddle the streets. In the second trailer of the Stories from The City series, the wise old crone gives her views on the City as it goes through a time of death and gloom.

Part 3: “The Thief Taker General’s Hunt”.
The City is the chain around your neck, the shackle around your ankle. It doesn’t deal any favours, and neither does the Thief-Taker General. But there is always that fly in the ointment, that grain of sand in the gears. That Master Thief will be caught… It’s in his job description, after all.

Welcome to the Thief 2014 walkthrough! ClickToUnlock will be your voice-over commentator showing you around the game’s areas.

This 100% complete Thief 2014 playthrough is played as a full stealth run (undetected), while picking up all collectibles like loot and unique items from the game’s many (hidden) rooms!

Tip: The first thing you should do when you enter a new room is take out the candles and light switches that light it, so you can stealthily make your way around each room in darkness. — Use Water Arrows to douse candles, torches, and other sources of fire from a distance.

Garrett the Master Thief returns to The City after a heist gone wrong, attempting to reach his hideout in Stonemarket Clocktower. Along the way, he happens upon a jewelry store. Garrett being who he is, you can imagine what happens next… Each situation can be approached in multiple ways.

Tip: Shooting arrows at or throwing objects like bottles, vases or cutlery plates will attract attention from people and guards… The good news is that you can use it to your advantage by throwing objects somewhere away from you to create a distraction to lead guards away from your position. — Grab a bottle off crates and then to throw it you have to equip it from the inventory.

Next, you’ll find out how to find all collectables and 65/71 loot in the game’s second chapter.

Note: Before you start playing Chapter 2, make sure you buy the Wrench, as it allows you to enter the secret tunnels in this level.

Tip: Donate gold to the Queen of Beggars to receive Focus Points. Use Focus Points to enhance your Focus Abilities.

Here’s where to find all loot and collectables in one of the Client side missions. Your main objective is to find a crystal skulled called “The Talking Skull”.

Tip: Some surfaces, such as water, make movement easier to detect. Move very slowly to reduce the sound you produce.

Let’s find out how to complete the first of the Ector’s Emporium side missions.

Ector wants you to break into Alfonso’s tailors and steal a mechanical hand he says belongs to him. Something feels odd about this whole affair but the loot sounds interesting, so Garrett will do it.

Tip: Slowly approach guards and other unsuspecting people from behind to take them out. Crouch to avoid their detection, as it keeps your noise volume to a minimum.

Thief 2014 Walkthrough continues on Page 2 with Side Mission 3 – Ector Mission: Silence Is Golden.