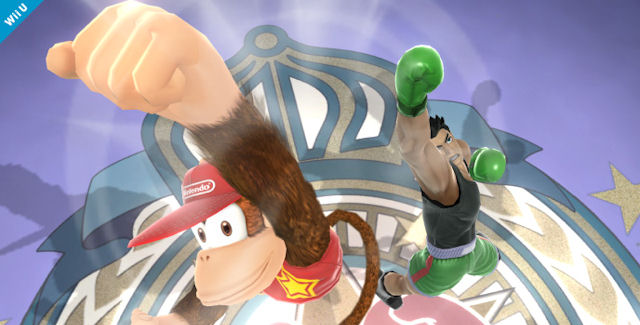 Let’s go over what he said about each new addition….

About Diddy Kong: “Donkey Kong Country: Tropical Freeze is out now in Europe and North America! …And to celebrate, Diddy Kong joins the battle!!”

Here’s a discussion while showing the new Diddy screenshots.

About Little Mac: “From Punch-out!!, our boxing challenger Little Mac joins the battle!! To get a glimpse of his fearsome punches, check out the newest video.”

About Lucario: “The heroic Aura Pokemon, Lucario, joins the battle!! We’ve increased the influence of Aura this time, so a damaged Lucario is truly a force to be reckoned with.”

Hear some first impressions of Lucario’s movies while looking at screenshots.

Do you like these additions to Super Smash Bros Wii U & 3DS?