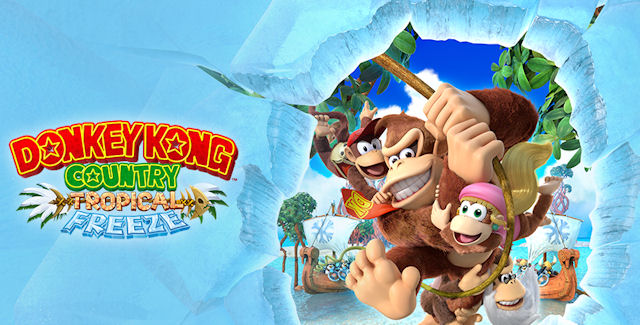 Our Donkey Kong Country: Tropical Freeze walkthrough will guide you through the beginning to ending moments of gameplay with strategy tips for this platformer on the Wii U.

The invading Snowmads have locked Donkey Kong Island in a deep freeze, and it’s up to the Kongs to thaw things out!

Suitable for ages 3 and up. This game includes Mild Cartoon Violence.

Donkey Kong’s ultimate platforming adventure barrel-blasts onto Wii U! Team up with buddies to master their moves, from Diddy Kong and his jetpack to the fresh additions of Dixie Kong with her spinning ponytail and Cranky Kong with his pogo-cane jump. Journey across 6 distinct islands filled with dynamic levels and non-stop action.

Reclaim the now-frozen DK Island from the invading Snowmads. Master Donkey Kong’s ground pound and each of his buddy’s unique abilities to navigate diverse island environments like Mangrove swamps, Savannah storms, ocean depths, and the frozen lands of DK Island. The barrel-blasting, mine-carting action of Donkey Kong Country is back, along with a bushel of new features like upgraded underwater swimming, a new “plucking” system, dynamic viewing angles from a rotating camera, and collectables galore. Team up with friends in local 2-player multiplayer to share in the adventure and reclaim DK Island from a host of wintery baddies and bosses.

Nintendo’s Kit & Krysta show you some of their favorite levels in Donkey Kong Country: Tropical Freeze on the Wii U. They also share some handy voice-over tips and tricks as they play, to get you started in the DK clan’s latest adventure.

Note: You can play through the whole game on your own or with a buddy in multiplayer! In classic play, sprint, swing and swim through 2D stages, snatching up fruit and stomping enemies as you make your way to the goal. You can also put your solo skills to the test in two new modes, Time Attack with online leaderboards and the Hard Mode that gets unlocked after you finish the game for the first time.

Tip: Grab and Go! Pull handles and more to advance through the stages and uncover secrets. You can grab some enemies, then throw them back at their comrades!

Welcome to the Donkey Kong Country: Tropical Freeze walkthrough! Tilmen will be your guide showing you around the game’s levels.

Control the Kongs as they leap, run and roll through action-packed stages on a quest to reclaim Donkey Kong Island from the marauding Snowmads! Explore the islands, swim, swing and spring through six brand new island worlds packed with hazards, hidden collectibles, and cool boss encounters!

Lost Mangroves Info: Get into the swing of things among the coves and canopies of this lush island.

Here’s the complete first World up to the Viking Sealion boss fight.

Donkey Kong Tip: The leader of the bunch, this headstrong Kong’s strength is his trademark. Whether blasting through enemies with a Barrel Roll or shaking things up with a Ground Pound, Donkey Kong’s definitely got the power!

Autumn Heights Info: Journey past the windmills and waterways as you scale the mighty mountain.

Diddy Kong Tip: This dinky Kong bombards targets with a high?powered barrage of monkey nuts from his Peanut Popgun. Not only that, his Barrel Jet can help him hover briefly – perfect for getting a little extra length on those jumps!

Here’s the complete third World up to the 3 Baboons boss fight.

Dixie Kong Tip: Dixie’s back in the swing of things! Her hair whip attack keeps enemies at bay, but her helicopter hair is her crowning glory – by spinning her ponytail after a jump she can lift herself even higher!

Here’s the complete fourth World up to the Giant Pufferfish boss fight.

Cranky Kong Tip: After a spell on the shelf, Cranky leaps into action! Cranky Kong has his pogo-cane jump that allows him to cross hazardous pitfalls that would kill other Kong’s. He might look a little long in the tooth, but with his unique abilities and years of wisdom too, this Kong’s still got what it takes!

Juicy Jungle Info: Jellies, jams and a giant river of juice await in this fruity forest full of sticky situations!

Here’s the complete fifth World up to the Popsicle-loving Polar Bear boss fight.