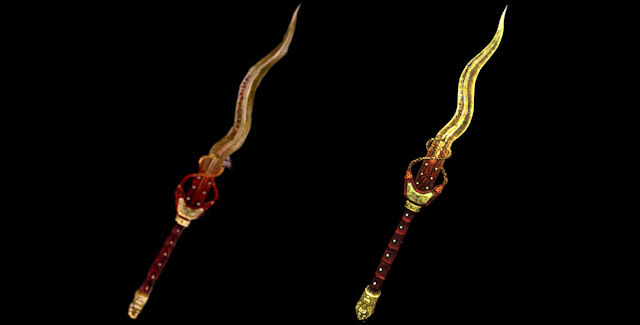 Finding the 17 Legendary Weapons locations and picking them up will help unlock the following Achievement:
* “Horde Mode” (10 Gamerscore) — Some weapons are Legendary, and we feel it’s worth you collecting at least 10 of them.
* Bonus: You are going to look SO COOL wielding these powerful Legendary Weapons! 😀

The guide below shows you how to unlock all Legendary Weapons.

Official Description: “Legendary weapons are incredibly rare, and were once wielded by Heroes and long dead kings. Use their power wisely!”

How To Unlock Legendary Weapons: Legendary Weapons are unique in appearance, are available only once in the game, and often require first completing a Quest (listed below), a Demon Door challenge (as shown in our Fable Anniversary Demon Doors Locations Guide) OR by collecting a number of Silver Keys to open the Silver Chests they can be hidden in (as shown in our Fable Anniversary Silver Chests Locations Guide).

Further unlocking methods are detailed in the list here-under…

The Legendary Weapons list is organized in alphabetical order.

Description: Left for dead during the Olagan massacre, Arken swore vengeance on those who ambushed him. Crafting a crossbow from scattered pieces found at the battlefield, this legendary weapon was used to hunt down every last ambusher.

How To Unlock Arken’s Crossbow: Can be found in a Silver Key Chest in Darkwood Lake that requires 15 Silver Keys to open.

Description: Existing for a time as pure myth among acolytes, this longsword once belonged to a mere guard. Used by the Guild Mage Solcius to close a vortex, the ordinary sword was imbued with enough power to rival the Sword of Aeons.

How To Unlock Avo’s Tear: It can be obtained in “The Hidden Sword” quest. The Guildmaster’s quest is about an ancient sword which is hidden somewhere in the Heroes’ Guild.

Description: Kept as part of a legendary treasure instead of being used, this cutlass is rumored to have a palpable hunger for blood.

How To Unlock The Cutlass Bluetane: It is obtained by opening the Greatwood Caves Demon Door. — To open the door, the player must have an active combat multiplier of 14 or higher. You can use your summon spell to create enough monsters to reach the needed multiplier.

Description: Despite his quick fingers and eye for detail, only once did the Dollmaster create a weapon. It is said this mace is as colossal as his dolls were delicate.

How To Unlock The Dollmaster’s Mace: It is obtained by opening the Abandoned Road Demon Door. — To acquire the mace you will need to acquire 3 full sets of clothes: the Bright Platemail Suit, the Bandit Outfit, and a Dark Will User’s Outfit. You will need to put them on one at a time and speak to the door after putting each outfit on. It will indicate which “individual” it would like to see.

Description: The folded steel of a katana can only be so strong, however, through secret supernatural skills Hiryu was turned into something special. These ancient skills died with the monks of the far hills.

How To Unlock The Katana Hiryu: Can be found in a Silver Key Chest in Bowerstone Manor, inside Lady Grey’s Bedroom, that requires 15 Silver Keys to open. However, Lady Grey’s Bedroom can only be accessed by marrying Lady Grey OR access to the manor will be granted by exposing the murder of Lady Grey’s sister and becoming mayor.

Description: Stolen from the Murren Graves following the collapse of the Old Kingdom, little is known of the godlike warrior this greataxe was prised from. It is said the deadly blade of this weapon still glow with a divine quality.

How To Unlock The Murren Greataxe: It can be found at the top of the Hook Coast Lighthouse in a Silver Chest, which requires 15 Silver Keys to open.

Description: Stolen from the Murren Graves along with a greataxe, this weapon was never recovered. It is said both weapons were forged by the will of the gods.

How To Unlock The Murren Greathammer: It can be found in the Heroes’ Guild Silver Chest, which requires 20 Silver Keys to open.

Description: Shunning society and living in the mountains, diminutive warrior Orkon was often mistaken as a hobbe or sometimes a baby troll. Any enemy seeing this small warrior charging with club in hand would laugh, though it was the last thing they ever did.

How To Unlock Orkon’s Club: It can be found in a Normal Chest near Archon’s Shrine.

Description: Forged by old kingdom foresters, Ronok has survived the test of time. Remaining as sharp as the day it was forged, this axe has seen centuries of combat.

How To Unlock Ronok the Axe: It can be found behind the Grey House Demon Door. To enter the door, you must be married to Lady Grey (if she divorces you the door will still open). — Note that if you decide to not marry Lady Grey, or to turn her in for her murdering her sister, the weapon cannot be obtained.

Description: Dark and terrible secrets propel the arrows from this bow, fuelled by a unique power. It is rumoured this longbow is the weapon of the Overberg.

How To Unlock Skorm’s Bow: To obtain this weapon, you have to earn enough evil points through sacrificing followers (3-4AM for good players / right before sunset for evil players). — OR during the “Trader Escort” quest, go to the Chapel of Skorm right after they have had their break at the Camp and sacrifice the dark-hatted trader just before morning. — Make sure to Hero save before doing this, because if you mistime your sacrifice you may not want to be stuck with all those evil points.

Description: Held in awe of swordmasters and combatants throughout Albion, this greatsword once belonged to the mythical dragonknights.

How To Unlock The Solus Greatsword: If you want the best sword, you’ll first have to complete The Arena quest to unlock access to Bowerstone North. Visit a traders in Bowerstone North to find the Solus Greatsword for sale there at a high price (depending on the Hero’s alignment). Then you can you can unlock the most powerful weapon in the game by buying it for around 70,000 gold.
Alternatively, if the Hero marries Lady Grey, he can court her by giving her gifts and flirting with her. As a result she’ll eventually give him the Solus Greatsword (without augments) as a gift.

This video guide shows where to find & how to unlock the Solus Greatsword. It starts at 2:20 minutes:

Description: Bloodforged long before the Old Kingdom, this longsword is the oldest of all weapons. This weapons power is that of all Albion, if it ever gets unlocked.

How To Unlock The Sword of Aeons: It can be obtained in the Chamber of Fate, after the final boss is defeated. BUT to unlock it the Hero must sacrifice his sister. The only other option is to throw it into the vortex to destroy the sword, which will give you the equally powerful Avo’s Tear sword.

Description: When his family was ripped to pieces by demonic creatures, Hero Wheldon made a bargain with a necromancer. His life for a sword, powerful enough to destroy the creatures. Having his heart made part of the sword, his lifeless body fell to the ground upon completing his revenge.

How To Unlock The Avenger: It can be found in the Lost Bay Silver Chest, which requires 30 Silver Keys to open.

Description: Soaked in mystery as well as blood are the origins of this broadsword. Some claim it belonged to the most evil Hero of the Guild, though no record of his name could be found. Others claim it belonged to a demon not a man, and that was why it gleams with the fires of hell.

How To Unlock The Bereaver: It is obtained by opening the Necropolis Demon Door. — Warning! Going after this extremely powerful weapon is best saved for last, until after you’ve already opened up all Silver Key Chests in the game, because in order to obtain the weapon you have to give up all Silver Keys in your possession to the Necropolis Demon Door.

Description: Created by the twins Elda and Essa, this longsword had a bloodsoaked start. To ensure the world would never see another weapon like it, the twins of this sword cut off each others hands with it.

How To Unlock The Harbinger: It can be found stuck in a rock near the Temple of Avo, it’s just up the hill where a group of people are trying to pull it out. — In order to remove the sword from its stone, your Hero must have upgraded physique 5 times, health 2 times, and toughness 3 times after your first attempt at pulling the sword from the stone. Note that having full stats will allow you to succeed as well.

Description: As majestic as any sceptre, this greatmace is powerful enough to bring empires to their knees. It is rumoured to have been owned by the bodyguard to the Archon, first ruler of the Old Kingdom.

How To Unlock The Sentinus: Donate lots of money to the Temple of Avo. How much is determined by the Hero’s alignment… If you’re partly or fully evil the donation amount required to get it is between 35,000 and 40,000. If you’re partly or fully good, then it can cost up to 300,000, so you may want to do this at a point in the story when you’ve become at least partly evil (before eating tofu and whatnot to become good again).

Description: Hidden mines provided strong but extremely light metal to Wellow, the ruler of the northern ridges of the Old Kingdom. It is said his warloads used pickhammers forged from this metal, much like the one Wellow carried.

How To Unlock Wellows Pickhammer: The Greatwood Gorge Demon Door requires you to perform a great deed of evil in front of it before it’ll give you the weapon. This can be done by either already being pure evil, or if you’re good by eating 11 crunchy chicks in front of the Demon Door.

This video shows all the Legendary Weapons in motion: