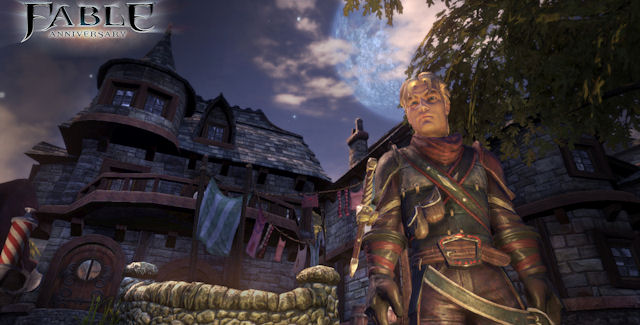 Welcome to the Fable Anniversary Clothing locations guide that helps you find the Clothing Items locations for the Xbox 360 action-RPG game. Aside from the various Outfits AKA Suits in the game, the HD remake also includes DLC Outfits.

The overview of all the in-game clothing items is listed below.

Tip: Any DLC Outfits that you’ve downloaded onto your Xbox 360 will then have to be picked up at the in-game Guild Shop before they appear in your Inventory.

How To Change Clothes?: Go into the Inventory Menu and choosing which articles of clothing you want to wear under the Equipment section; There are five Clothing Slots for the Helm, Torso, Gloves, Legs & Feet. — While playing Fable Anniversary, press on the Back button (left of the Start button) to bring up a menu that lets you select Equipment / Items and then go to Clothes to switch to the new (DLC) Outfits you want to wear.

The clothing you wear in the game affects these four statistics: Alignment, Armour Value, Scariness & Attractiveness.

As you’ll see in the list, there are various clothing sets that have neutral, good & evil versions.

• Bandit Bandana: All Bandit clothing pieces can be found in treasure chests and taken from Bandit Guards outside of the Bandit Camp during that story quest.
• Bandit Shirt
• Bandit Gloves
• Bandit Trousers
• Bandit Boots

If you buy Fable Anniversary during the launch period, you’ll receive free bonus item download codes in the game box!

Included in the Fable Anniversary box are these bonus in-game outfits, weapons & a special avatar item:

• Let’s begin with one free piece of in-game content for everyone: Dave’s “Mind Crate” Hat.

When you go to your nearest retailer to pre-order, you’ll receive some free exclusive new content!

By pre-ordering from selected retailers you’ll also be able to get your hands on one of the following packs:

Peirat’s Outfit: Peirat’s was a famous plunderer, known for travelling uncharted waters to take entire cargo ships hostage for their most expensive items. He was also known by the name “Pete” in less formal circles.

Snowspire Guard Outfit: Made from genuine horse hair, this outfit is said to calm even the most vocal of criminals.

The Jackarse: An age-old popular pasttime was run by a chap named Jack, who used to slap people around the face with a dead fish until they fell onto their arse. The rest, as they say, is history…

Apollo’s Outfit: Apollo is the pseudonym for the leader of The Grey Company, the man responsible for monitoring Lady Grey’s financial investments. As fearsome as that may sound, he had a reputation for being incredibly nice, often using his own money to bail out any villager that couldn’t afford that months rent.

Apollo’s Crossbow: Based on a centuries old concept, Apollo wanted to create a modern crossbow with the feel of a relic from the past – and thus this crossbow was born. Dependable in combat, but also pretty tasty to look at.

As soon as Fable Anniversary was finished the game’s artists started working on some fantastic brand new outfits and weapons for launch on the Xbox Games Store! — What’s more, just for you Chicken Chasers, each pack will be half price at $2.49 for launch week!

There you go! All Clothing in Fable Anniversary will soon be yours! 🙂

Huge thanks to Lionhead Studios & Wikia for the guide, list and tips.

Please comment if you have any additional Fable Anniversary Clothing location tips of your own, we’ll give you credit for it. – Thanks for visiting!