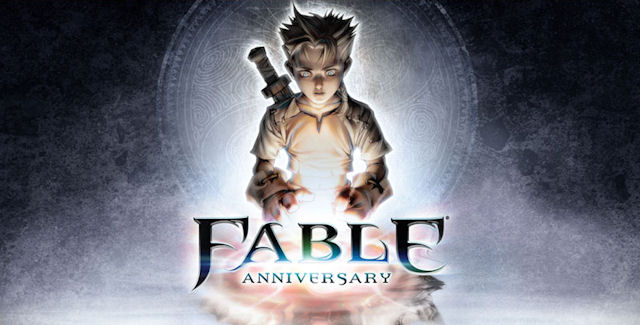 Our Fable Anniversary walkthrough will guide you through the beginning to ending moments of gameplay with strategy tips for this action-RPG on the Xbox 360.

Let’s start the Fable Anniversary walkthrough with an introduction video!

Please note that viewers must be at least 16-18 to watch, in Europe & America respectively, so no harm comes to those with innocent eyes. This game includes Blood and Gore, Language, Sexual Content, Use of Alcohol, Violence.

For Every Choice A Consequence

As one of the best-selling RPGs on the original Xbox, Fable made sure every player’s choice had a consequence. The world of Albion has inspired gamers to fall in love with the franchise for nearly a decade and counting.

Updated to HD to unlock the power of Xbox 360, Fable Anniversary is a major visual leap over the original. Vivid graphics and remastered audio result in a stunning re-imagination of Fable that will impress fans old and new.

This role-playing adventure puts you in full control of the choices that will determine your skills, appearance, and reputation. Create your life story from your early years as an inexperienced warrior to the prime of life as you become the most powerful being in the world. Choose the path of righteousness or dedicate your life to evil. And don’t forget to hide the chickens — Jack of Blades is back.

With all new textures and 3D models, an entirely new lighting system, a slick new interface, achievements, and all of the content from “The Lost Chapters” expansion, Fable Anniversary is the definitive Fable experience for faithful fans and new players alike.

Fable Anniversary is without a doubt a major leap visually over the original Fable, with stunning graphics and audio remastered for the Xbox 360. The development team has devoted enormous resources into remaking the adventure, breathing new life into the beloved classic with advancements like vastlyimproved fidelity, lighting, special effects and more. The result is a stunning reimagination of the original game that will delight fans old and new.

Through the power of Xbox 360, gameplay in Fable Anniversary is more seamless than ever and this version boasts a new user interface system that’s been designed to simplify and make it faster and easier to explore the rich world of Fable and its menus. In addition to lightning-fast load times, there’s an all-new save system that’s been built from the ground up to provide the player with the ability to save anytime, anywhere, including during quests. Fable Anniversary also revitalizes the features that Fable fans have come to love with an updated, optional control scheme acclimated for fans that loved the play styles of Fable II and Fable III.

Achievements in Fable for the First Time

Fable Anniversary includes a full 1000 achievement points that are guaranteed to challenge and surprise new players and even the most veteran Fable fans as they explore the world of Albion again.

Question 1: We’re definitely excited to go back to Albion, but why did the team decide to remake a game that’s almost a decade old?

The original Fable is a very special game to many of our fans and we decided to remake it for them. They constantly sent us messages on Facebook and Twitter asking for remake and with the 10 year anniversary coming up we thought the timing was right.

Question 2: What’s the first thing fans who played the original “Fable” will notice about the new version of the game?

Apart from how good everything looks, I think the first thing the fans will notice is that it still feels like the same game and that was very important to us. We wanted to add fidelity to the world and to the characters without changing the core experience.

Question 3: Did the development team have to overcome any particular challenges in bringing the game from the original Xbox to the Xbox 360?

One of the most challenging aspects was just dealing with the sheer complexity of the original game. There are many systems running throughout the game dealing with everything from player morphing to the NPC AI, all of which were combined with the main Gold and Silver quests and the even more challenging random Bronze quests. We spent a lot of time making sure that all of this was still working just like it did in the original.

Question 4: We’ve heard there’s a new save system that’s been designed specifically for “Fable Anniversary”. Could you tell us a bit about what’s changed?

We brought the save system up to more modern day standards. The original game had a ‘World Save’ when you were not on a quest and very confusing ‘Hero Save’ for when you were on a quest. The major problem being that you couldn’t save your progress during most of the quests, so if you died or had to switch off the console you would lose all of your progress. We changed all of this so you now have checkpoint saves when you are on a quest to automatically save your progress and you can create a manual save at any point in the game.

Question 5: It sounds like there are a lot of new weapons and items in “Fable Anniversary”. What’s your favorite? Are there any weapons that longtime fans will recognize from other games?

The new Will Staff is a firm favorite for us. If you are like some of the guys in the office and you try to play the game only using magic, there was never really a weapon that made sense for you to carry around. But now you can carry around a bad-ass staff (or a lute?!).

Question 6: Did you know from the start of the development process that you wanted to include content from “The Lost Chapters”?

“The Lost Chapters” is very much the definitive version in our mind, so there was never any doubt for us. How could we possibly recreate this game without including the awesome boss fight at the end of “The Lost Chapters”?! #SPOILERS

Question 7: There are some really cool SmartGlass features in the game. Which do you think the community will appreciate and use the most??

SmartGlass is a very exciting technology for us and it has been the main way for us to add extra detail and information to the game without modifying the original design. Fans of the original game will really enjoying reading the character bios as they play through and learning even more about everyone’s backstory. In every region you can also check out screenshots from the original game to see exactly how far we have pushed the visual quality since the original.

This is an introduction to the Fable 1 HD Remake on Xbox 360. The original Fable is ten years old this year. To celebrate, Lionhead Studios is releasing Fable Anniversary, an HD remastering of the original game with new visuals, remastered audio and a bunch of tweaks to the gameplay.

How to get started with Fable Anniversary? Hit play to find out with some gameplay tips.

Hint: Every Hero needs a title! Buy yourself a nickname from a Title Vendor, and soon everyone will have heard of your new alias.

Welcome to the Fable Anniversary walkthrough! Gabe will be your voice-over commentator showing you around the game’s areas as a good person.

As the biggest selling RPG on the original Xbox, Fable pioneered every player’s choice having a consequence. The world of Albion inspired gamers to fall in love with a franchise for a decade and counting. With Fable Anniversary, players will be reminded why the Fable franchise is so special, and why there is nothing else quite like it on any other gaming platform.

Every tall Oak tree needed to have its acorn moment, this is yours.

Tip: The Snowspire Charity Shop isn’t just a place to get rid of unwanted items, it’s also a perfect way to improve your morality. — Donating high value items will also increase the chance of bargain items appearing for sale. So there’s really no excuse to be stingy.

Graduate from the Heroes Guild to become a real Hero.

Tip: Tresspassing on someone’s property is a crime. The villagers will warn you before resorting to calling the Guards. The guards will then also warn you before attacking! Night-time ‘visits’ are likely to be more rewarding, but you must remember to sneak!

Let’s do some Heroes Guild Quests in Lookout Point, starting with the Wasps Menace.

Tip: Some potions boost your attributes permanently! These Elixirs are extremely rare so keep an eye out for them.

Here we do some Heroes Guild Quests in Bowerstone, namely The Sick Child.

Tip: Whenever you have enough Experience to level up at the Guild, your Guild Seal will flash with the level-up icon in the bottom left corner of the screen. — To improve your attributes and acquire new abilities, head back to the Map Room in the Guild, and walk into the Experience Spending Platform, opposite the Guild Cullis Gate.

Let’s do some more Heroes Guild Quests in Darkwood, begin with the Trader Escort.

Tip: When the pressures of being a Hero become too much, drown your troubles in some sweet alcohol. Warning: May affect motor skills. Generosity is often appreciated by other pub goers too…