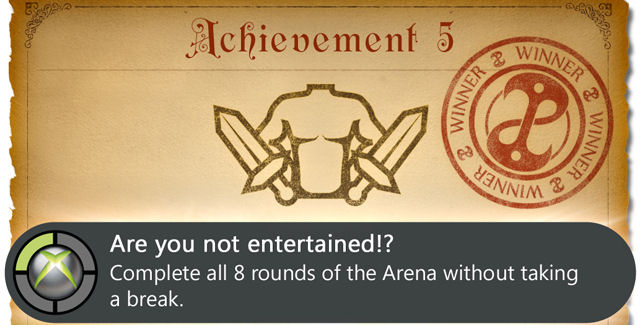 The Fable Anniversary achievements guide lists every achievement for this Xbox 360 action-RPG game and tells you how to get and unlock them.

In the Fable Anniversary achievement guide we’ll show there are 50 Achievements (0 Secret) with a total of 1,000 Gamerscore points to earn in the Xbox 360 HD remake version.

1. Are You Not Entertained!? (20G) — Complete all 8 rounds of the Arena without taking a break

Note: Missable Achievement. This is the winner of Lionhead Studios’ “Design an Achievement” fan competition poll on their Facebook page. The achievement name is a quote reference to the 2000 movie Gladiator, in which Russell Crowe’s character Maximus said this.

4. As Quiet As A Whisper (10G) — Defeat Whisper in a battle without losing any health.

Missable Achievement. As soon as you become an apprentice, and the guild master gives you the iron longsword, you get to fight Whisper. Then after Thunder’s 5-minute-long cutscene, you have to really duel Whisper. The trick to not get hit here is when she does an air-kick, you roll away to the left or right to avoid her, then go towards her and get a few hits in with your sword. Repeat this process each time she does an air-kick and you’ll have this achievement in no-time!

5. For Every Choice, An Achievement (25G) — Become holier than Avo, or more evil than Skorm!

7. That’s A Real Lunker! (15G) — Win 1st prize in the Fisherman’s competition, or complete the boast for doing any quest naked.

Watch the video guide with voice-over tips to see how it’s done.

9. Arthur Or Robin? (15G) — Pull the sword from the stone, or earn the top prize in the Archery Competition.

11. Open Saysmemiddlefinger (20G) — Open all the Demon Doors, or show a closed Demon Door what you think of it.

Tip: To find all 15, check out our Fable Anniversary Demon Doors Locations Guide.

12. Project Ego (15G) — Show all available witnesses a trophy in the trophy mini-game, or decorate your home with a trophy.

13. What Are Ya Sellin’? (10G) — Make a profit from selling to a trader, or steal an item using the “Steal” expression from a trader.

14. The Hero Of Time (10G) — Eat a Moonfish in Bowerstone during the day, or a Golden Carrot at night.

15. Beauty Or The Beast (20G) — Reach the maximum of your chosen attractiveness; ugly or beautiful!

16. Marital Relations (10G) — Receive a gift from your spouse, or flirt with an admirer in front of your spouse.

18. Definitely Not On Rails (20G) — Visit every region (excluding Demon Doors), or increase your waistline so that you don’t have to.

20. Ass Creed (5G) — Whilst dressed as an Assassin, be silent but deadly

21. I Did This For A Cheevo (5G) — Perform a headshot with a Crossbow whilst dressed as a woman wearing a beard and the Redhead Wig.

22. There Is No Spoon (10G) — Use the power of mind control on an enemy, and have them kill one of their allies.

23. Out Of The Frying Pan… (25G) — …Into your face! Express your feelings through the medium of Frying Pan.

25. The Summoner’s Tail (10G) — Summon a powerful creature to fight by your side.

26. The Swinging Sword (20G) — Hit 3 enemies simultaneously with a single flourish like you’re a real swinger.

27. You Are A Super Player (30G) — Find all 30 silver keys. In unrelated news; the Fable Anniversary Strategy guide is available now!

Tip: To find all 30, check out our Fable Anniversary Silver Keys Locations Guide.

28. Fable Heroes (15G) — The Bowerstone Teacher is on the lookout for Hero Dolls, help him find them!

Tip: To find all 7, check out our Fable Anniversary Hero Dolls Locations Guide.

29. Education Rules The Nation (25G) — The children in Bowerstone have no books to read! You don’t want illiterate children, do you?

Tip: To find all 25, check out our Fable Anniversary Books Locations Guide.

30. Get It Off Your Chest (5G) — Open your first Silver Key Chest to reveal the amazing surprise inside!

Tip: To find all 12, check out our Fable Anniversary Silver Chests Locations Guide.

Tip: To find all 17, check out our Fable Anniversary Legendary Weapons Guide.

32. The Ultimate Warrior (5G) — Treat yourself to a beard, haircut and tattoo, the ‘Toupée And Tattoo Society’ demands it.

36. From The Smallest Acorn (25G) — Every tall Oak tree needed to have its acorn moment, this is yours.

37. The Graduation (25G) — Graduate from the Heroes Guild to become a real Hero.

39. The Bloodline Part I (25G) — Find the whereabouts of your sister, she’s very important to the future of Albion.

40. Under A Full Moon (25G) — There’s something going on in Knothole Glade under a full moon. Cliché? Never.

41. Gladiator, Ready! (25G) — Take on the might of everything that Albion has to offer. Well, almost everything…

42. A Family Friend (25G) — Rescue the Archaeologist, and find the secret entrance into Bargate Prison.

43. Fishing In A Graveyard (25G) — Go fishing and digging in a graveyard, as if it’s a completely normal thing to do.

45. There’s Always A Lighthouse (25G) — Would you kindly rid Albion of its greatest traitor.

47. Winter Is Coming (25G) — Travel to the Northern Wastes, because it sounds like just the place you’d want to visit.

48. Are You Listening to Me? (25G) — Few things are smarter in Albion than a talking stone door, so imagine a door that knows the YMCA.

49. Making Tough Decisions (25G) — Behind the Bronze Gate lies your destiny, and all it needs is the death of your closest allies.

50. (#SPOILERS) (100G) — It’s time to defeat the super awesome boss, the one you will see if you unlock this achievement.

Take a look at the Fable Anniversary stage demonstration by Lionhead in their home in the UK:

Special thanks to Lionhead Studios, Mario & XboxAchievables for the list, tips & guide videos.

Please comment if you have any Fable Anniversary achievement unlock tips of your own. Kudos will be given. – Thanks for visiting!