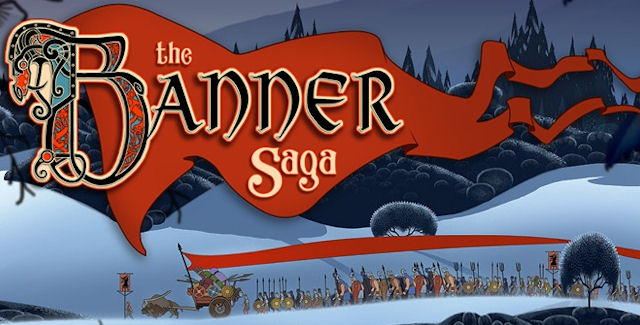 We are giving away 2 highly sought after copies of The Banner Saga, the critically acclaimed epic Viking RPG strategy game for PC and Mac.

To enter, please answer the following question in the comments section below:
“How excited are you to play The Banner Saga?” 😀

What’s The Banner Saga about?

Live through an epic role-playing Viking saga where your strategic choices directly affect your personal journey. Make allies as you travel with your caravan across this stunning yet harsh landscape. Carefully choose those who will help fight a new threat that jeopardizes an entire civilization. Every decision you make in travel, conversation and combat has a meaningful effect on the outcome as your story unfolds. Not everyone will survive, but they will be remembered.

To see what the game’s all about, including the beautiful art style, you can watch The Banner Saga trailer:

The Key Game Features Are:

This giveaway is open to everyone worldwide. Leave one comment per person on this page with your answer to enter. The winners get a Steam Code to download The Banner Saga to their PC and/or Mac, so you must have a Steam account. Winners will either be chosen by a random number generator or be picked based on who has the most enthusiasm for the game. Contest ends 11:59PM PT on Sunday, January 28th, 2014. For legal reasons, if you’re younger than 18 years you need to get permission from a parent or guardian to enter the contest. The winners will be picked the next day, at which point we’ll email them instructions to claim their prize.

Note: Fill out your real email in the indicated “Email” field when posting your comment by pressing the “Post As” button, so we can contact you if you win. Note that your email will be invisible to other readers, only the site staff can see it.

Congratulations to the winners! You’ll be sent the Steam download code via email today, enjoy!

Thanks for a successful giveaway everyone. If you have any suggestions for other games to give away, leave a comment.