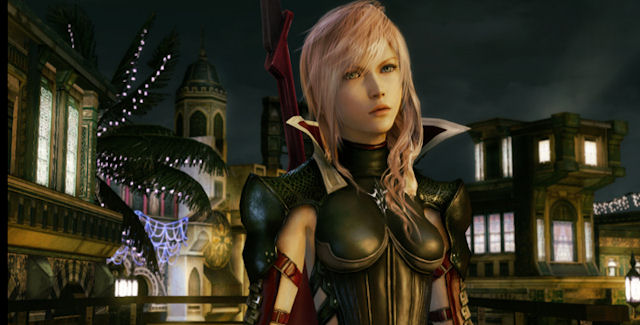 Here’s the Lightning Returns: Final Fantasy XIII Demo English walkthrough of the download that has been released on the PlayStation Network for PS3 and Xbox Live for Xbox 360 RIGHT NOW! 🙂

Get ready for some action-RPG Final Fantasy coming your way on PS3 & Xbox 360 in America/Canada on February 11th and in Europe/Australia on February 14th, 2014.

So what’s in the demo itself? Of course, you’re playing as Lightning, but you’re now mysteriously tracking down her old friend Snow Villiers in the city of Yusnaan. As Lightning, it’s going to be up to you to fight through the chaos to see what happened.

And the battle mechanics? No Final Fantasy is without battles, and this demo gives you just a taste of the real-time elements incorporated into both the field and the battle system, and it includes but a fraction of the ways you can customize Lightning.

Your default equipment sets (or Schemas, as they’re called in-game) are The Savior, Dark Muse, and Black Mage, but three battles into the demo you’ll unlock some Final Fantasy series favorites — Dragoon, Red Mage, and Heart Stealer, which may remind you of a certain thei–treasure hunter.

Once in battle, you’ll notice how the battle system has evolved from the traditional paradigm shift party system into strategically using Schema. Each Schema has its own ATB gauge, allowing you to attack relentlessly with commands mapped to corresponding buttons. Then you’ll switch to a new Schema, and all of your attacks change too, allowing you to pummel the enemy with different elements and attacks. Lightning is a one-woman army.

What are the new features? One of the features that the demo shows off is called the “Outerworld,” a way for other players to communicate their progress via social networks like Facebook and Twitter to post their battle scores. While in the demo, this is all you can do with Outerworld. The full game offers much more Outerworld functionality, including buying and selling items your friends may have.

While sharing your game scores with 9,999 of your closest Facebook friends may not appeal to everyone, we’re excited to give you even MORE free stuff. If you can beat the Zaltys monster at the end of the demo and you post your score via Outerworld, you unlock the Siegfried Garb in the full game. Who is Siegfried, you ask? Play Final Fantasy VI, and all will be revealed.

How does it compare to the previous games? Find out in the demo’s full gameplay playthrough, including how to beat the Zaltys boss fight at the end of the demo.

How are you enjoying the Lightning Returns: Final Fantasy XIII demo?