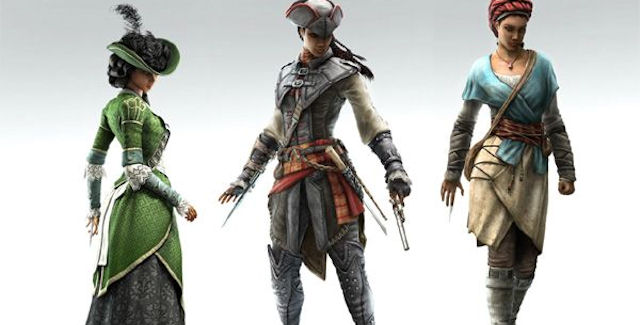 As an Assassin, Aveline has learned to hide in plain sight, and Assassin’s Creed Liberation introduces a few mechanics totally unique to this entry in the series that will allow her to become a master of disguise. By purchasing dressing chambers throughout the world, Aveline can swap amongst three personas, each with her own pros and cons. All three will affect the way she moves, fights, blends and gains notoriety. Meet the three faces of Aveline de Grandpré – the Assassin, the Slave and the Lady.

Welcome to the Assassin’s Creed Liberation HD Persona Missions Walkthrough!
XCV will be your guide showing you around the game’s new bonus missions.

The Assassin Persona Description: The most well-armed and armored of Aveline’s personas, the Assassin outfit allows her to conceal all of her weapons and run freely over any obstacle. Unfortunately, this persona is always Notorious, meaning guards will take immediate notice. Aveline’s Chain Kill ability can be accessed only while she’s wearing her Assassin garb. Using this ability you can stop the action for a moment and mark opponents for execution. Beware, though – this will raise Aveline’s notoriety further. Lower the Assassin’s notoriety by bribing magistrates.

This video guide includes all 5 of the Assassin Persona Missions: “Contracts” with 100% Full Sync.

Timeline in minutes for the Assassin Persona Missions Guide:

The Lady Persona Description: The weakest of Aveline’s personas, the Lady is the most skilled at blending. She can use bribery and a Charm mechanic (unique to the Lady) in order to work her way past guards. A charmed guard will trail after Aveline, and she can lead him wherever she needs to go without raising the suspicion of other guards in the vicinity. After that it’s a simple matter of disposing of the guard, and then she can complete her business from a distance using her Parasol Gun – a more incognito version of the Blowpipe. She will need to discreetly flee the area following the completion of her mission. The Lady gains notoriety more slowly than the other two personas, and he notoriety level can be lowered by eliminating any witnesses to her crimes. Due to her attire, the Lady is unable to jump, climb or sprint, though she can access rooftops via ladders if she needs to.

This video guide includes all 5 of the Lady Persona Missions: “The Plot” with 100% Full Sync.

Timeline in minutes for the Lady Persona Missions Guide:

The Slave Persona Description: Though weaker than the Assassin persona in both offense and defense, the Slave retains Aveline’s natural free-running skills and is much more capable of blending in. She is almost completely inconspicuous while carrying a crate and is able to simply walk past guards into restricted zones. Once inside, she can hide among working groups and crowds to remain undetected. If you’re looking for a distraction, the Slave can also incite riots in order to slip through an area unnoticed. Should the Slave become Notorious, you can reduce her notoriety by tearing down Wanted posters around town.

This video guide includes all 5 of the Slave/Servant Persona Missions: “Detective” with 100% Full Sync.

Timeline in minutes for the Slave Persona Missions Guide:

Big thanks to Ubisoft & XCV for the tips & walkthrough videos.