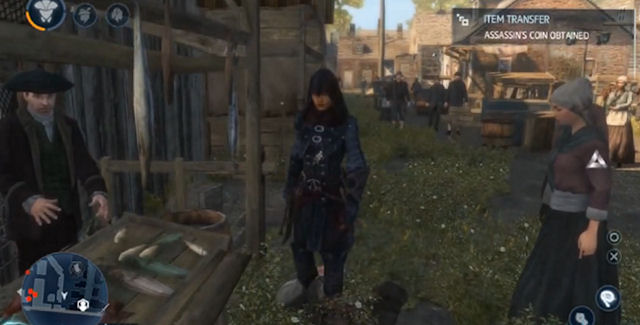 Finding all 10 Assassin’s Coin locations and picking them up will help unlock the following Achievement / Trophy:
* “Persona Collector” (Gold Trophy on PS3 / Silver Trophy on PS Vita / 40 Gamerscore on Xbox 360) — Collect every persona-specific collectible; namely find the Precious Stones, Assassin’s Coins, and Voodoo Dolls.
* Bonus: Once all coins have been collected, a special outfit for the Assassin Persona is unlocked.

The Timeline for all these in-game Assassin’s Coins locations is listed below.

Locations Overview: There are a total of 10 Assassin Coins in Assassin’s Creed Liberation HD. Seven coins can be found in New Orleans and the remaining three the Bayou. As the tutorial explains, you can beat up muggers to acquire foreign coins.

How to find missing Assassin’s Coins?: Only the Assassin Persona can pick up these specific collectibles! You need to knock out the people holding the coins and then loot them. It can be confirmed as being Assassin’s Coins simply by walking up to the man, beating him up and then looting his body on the floor to receive the coin. The on-screen text will then tell you that you have “Item Transfer – Assassin’s Coin Obtained”.

Tip: To check how many Assassin’s Coins you have already found, go to “Inventory” and then select “Items” in the pause menu.

The Assassin’s Coins are listed in the video in the order that they appear.

Timeline in minutes for the Assassin’s Coins Locations Guide:

Huge thanks to Powerpyx for the guide videos and tips.

Please comment if you have any additional Assassin’s Creed Liberation HD Assassin’s Coins location tips of your own, we’ll give you credit for it. – Thanks for visiting!