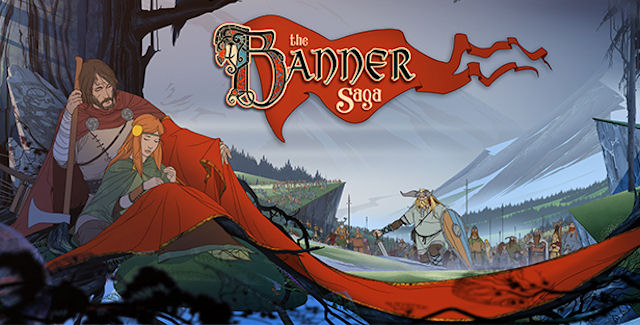 Our The Banner Saga walkthrough will guide you through the beginning to ending moments of gameplay with strategy tips for this tactical RPG on the PC, Mac and soon Xbox 360, PS3 & iOS.

The Banner Saga, an epic Viking RPG game where your choice in travel, conversation and combat determines the outcome of your own personal story as well as the survival of an entire civilization. Immerse yourself in a world brought to life by stunning 2D animation and art, a unique tactical combat system and a cast of unforgettable characters.

Let’s start the The Banner Saga walkthrough with an introduction video!

Index of The Banner Saga Guides:

Live through an epic role-playing Viking saga where your strategic choices directly affect your personal journey. Make allies as you travel with your caravan across this stunning yet harsh landscape. Carefully choose those who will help fight a new threat that jeopardizes an entire civilization. Every decision you make in travel, conversation and combat has a meaningful effect on the outcome as your story unfolds. Not everyone will survive, but they will be remembered.

Part 1 is a rough guide to Combat.

This first tutorial covers the basics that someone new to the game needs to consider when preparing for battle, and the tactics they need to think about while in the heat of combat. It includes a useful overview of the hero stats a player should keep an eye on as well as a focus on how ‘willpower’ can also be used strategically to boost various actions in combat to take out an enemy. Watch it to find out more.

Part 2 is a rough guide to Travel.

The second tutorial summarizes the key attributes you’ll need to take into consideration when deciding the travel strategy during your journey in the game. The tutorial explains how managing morale, supplies and population can greatly affect your personal experience, as well as each other. Watch the video guide to find out more.

Chapter 1: Only The Sun Has Stopped

Welcome to the The Banner Saga walkthrough! Rangris will be your guide showing you around the game’s areas.

The conclusion to Chapter 1 is shown at the start of the next chapter.

Lots of battles here, some battles are quite challenging even on normal difficulty mode.

The ending of Chapter 2 is shown at the top of the next page.

The Banner Saga Walkthrough continues on Page 2 with Chapter 3: Little Did They Sleep.