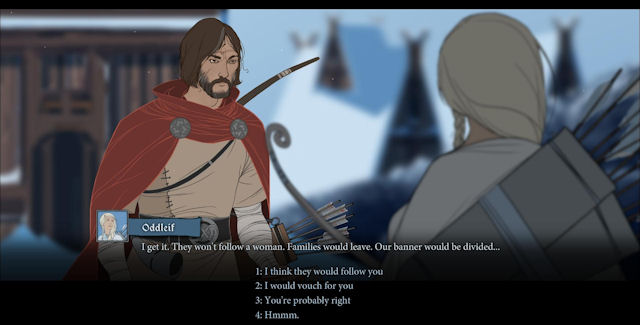 Index of The Banner Saga Guides:

As a pre-order bonus exclusive DLC, you can get the “Insane Viking” pack, which includes the exclusive Tryggvi character (spearman class) plus a necklace that grants a +10% extra damage in combat. It also includes three exclusive tracks created by Grammy nominated composer Austin Wintory.

Dialog Tip:
As you might expect from an ex-BioWare team of developers, the dialogue choices you make in the game’s narrative sections impact how the story plays out. That said, your dialogue choices are best made as judgement calls rather than trying to second-guess the game’s intentions. The reason behind this is that the game won’t ever give you a break anyway, even if you’ve had a run of bad luck of late.

There are no The Banner Saga cheats yet on PC, Mac, Xbox 360, PS3 or iOS. So until they are discovered, we made the handy The Banner Saga guides listed above to help you with tips and tricks for the game!

Do you know of any The Banner Saga cheats or unlockables?
Let us know in the comments, you’ll get credit for finding out. – Thanks for visiting!