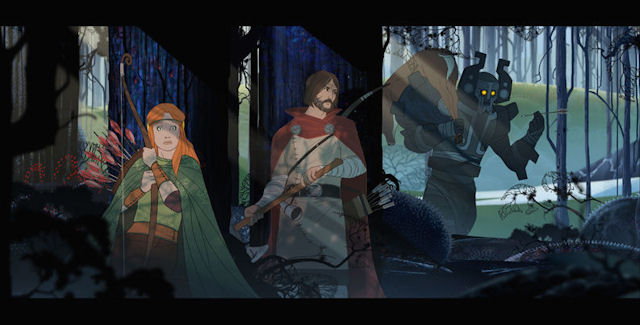 The Banner Saga turn-based tactical RPG will be released today on PC and Mac. Here-under you can watch the launch trailer for Chapter 1 of the single player campaign.

Indie developer Stoic Studio was founded by three ex-BioWare developers, who in their time there worked on the Star Wars: The Old Republic MMO. They started The Banner Saga as a spare time project for a game they thought would be fun to play, and later got funded in a $723,886 Kickstarter campaign that allowed them to hire a team and turn the project into a full game.

Check out the launch trailer for The Banner Saga, an epic Viking RPG game where your choice in travel, conversation and combat determines the outcome of your own personal story as well as the survival of an entire civilization.

The game aims to immerse you in a world brought to life by stunning 2D animation and art, a unique tactical combat system and a cast of unforgettable characters. A beautiful and haunting original score by Grammy nominated, and two-time BAFTA winner, composer Austin Wintory completes this unforgettable journey.

The artist has really created a beautiful looking game! The animation style reminds me of Dragon’s Lair, if that were a next-gen strategy-RPG.

Where To Buy It?: The Banner Saga is available now for PC and Mac on Steam, Uplay, Gamers Gate, and Gamefly.