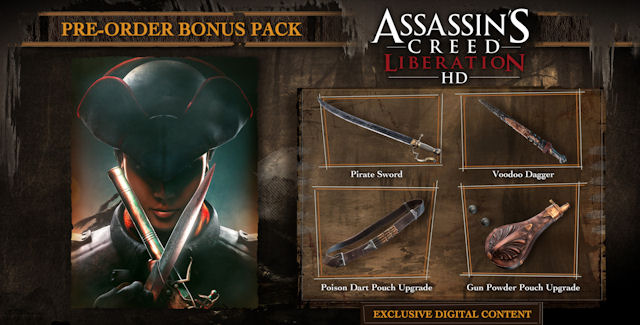 • PS3 DLC: Exclusive Theme for your PS3 system’s XMB menu screen will be made available in your download list after checking out. Please come back to PlayStation Store on PS3 any time after 12:01am (EST) on January 14, 2014 to download your game and access the bonus Assassin “Voodoo Pack,” which includes: the Voodoo dagger, pirate sword, ammunition pouch, and the poison dart pouch.

• PC DLC: Pre-order now and as a bonus you’ll get the “Voodoo Pack,” which includes: the Voodoo Dagger, Pirate Sword, Gun Powder Pouch, and the Poison Dart Pouch.

If you do not apply the latest patch to the PS Vita version of Assassin’s Creed 3: Liberation, you’ll be able to execute an infinite money cheat during ‘Ship and Goods Trading’.

Get more goods to arrive with a ship than there were when loading the ship. First you must have the ability to go to the Bayou at will, then take the following steps…

Step 1: Load a ship completely with a good,
Step 2: Send the ship off to another port,
Step 3: Exit the trading screen,
Step 4: Leave the city and travel to the Bayou,
Step 5: Return to the City once arriving in the Bayou,
Step 6: Return to the trading screen,
Step 7: All ships that were sent are in port regardless of how much time has passed,
Step 8: Select a ship to trade,
Step 9: Select Sell Goods,
Step 10: Three sets of the same goods should be available for sale, and each set has the ship’s maximum load meaning the ship is currently carrying 3x its maximum load and 200% more than what it left port with. This last step can be repeated with as many ships as you’d like.

Do you know of any Assassin’s Creed Liberation HD cheats or unlockables?
Let us know in the comments, you’ll get credit for finding out. – Thanks for visiting!