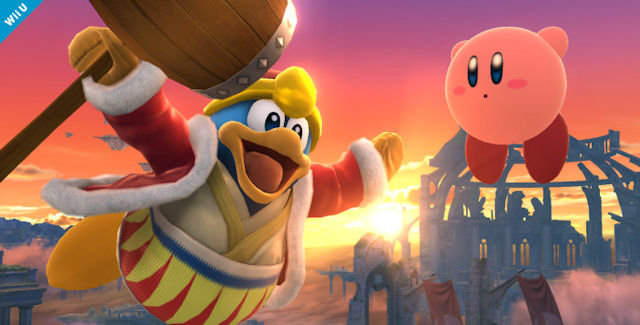 To quote Sakurai-san’s Twitter: “Pic of the day (shown above). Celebrating the launch of Kirby: Triple Deluxe in Japan, King Dedede joins the battle! Check out his evocative facial expressions on the official website.”

Here’s a video introduction for the veteran fighter, King Dedede, from the Kirby platformer series. The Gamexplain video shows and talks about all the King Dedede screenshots and gives some thoughts on this latest addition. Is he the same as before or does he have new tricks up his sleeve? Various face expressions aside…

The discussion continues about the latest Super Smash Bros for Wii U & 3DS news:
Trophies return with a lot unique to both versions of the game, Zelda’s new attack animations, the boxing ring’s bouncy ropes, and the new section of the Rainbow Road Mario Kart 7 stage.

I was expecting a Meta Knight announcement too. Maybe later?

Who else do you want added to Super Smash Bros Wii U & 3DS?