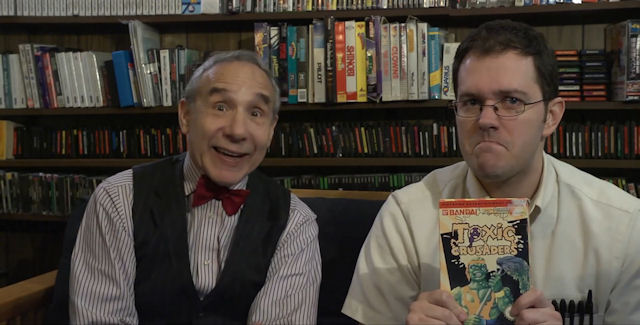 This is Episode 111 in a series of reviews of bad video games by the Angry Video Game Nerd. Watch as the Angry Nerd reviews the Game Boy, Genesis & NES versions of the 1992 beat ’em up game Toxic Crusaders.

The Toxic Crusaders box description reads: “Only a complete and helpless nerd like Melvin Junko could be such a klutz that he would run into a vat of Grossolium 90, a terribly toxic waste by-product of the Island City Chemical Plant. Now the wimpy nerd Melvin has mutated into Toxie, a hideously deformed creature of superhuman size and strength. But all is not lost. Toxie, with his newfound power, has joined forces with Major Disaster, Nozone, Headbanger, and Junkyard to form the Toxic Crusaders. No, not the ultimate heavy metal band, you moron! This motley crew is sworn to defend Tromaville and the rest of the U.S. from the polluting ways of Dr. Killemoff and his Radiation Rangers! It won’t be any easy mop up operation, but with your help the Toxic Crusaders are sure to make a clean sweep of the six levels of sludge, slime, goop, and grime, while washing Killemoff and his filthy friends off the face of earth forever!”

The Nerd is joined by special guest Lloyd Kaufman, as they step into radiated territory. As always, comedic yet coarse language ahead.

It was a bit of a corny episode (poop pun not intended!) but I think it’s good the Nerd gets a change of pace in comedy brand every now and then. That said, I hope the next episode will be fully filled with his angry tirades again. 🙂

What was your favorite part of this Angry Video Game Nerd review?