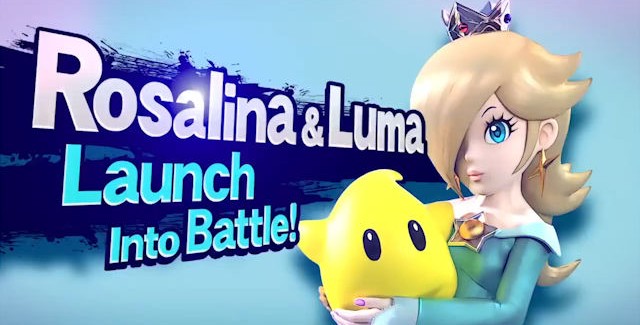 Addition #1: Strangely, the newest Zelda character confirmation was not accompanied by a Sheik transformation* announcement. Which of course leads to rumors that Sheik from The Legend of Zelda: Ocarina of Time may not be accompanying Princess Zelda on her adventure in the 4th Smash Bros. game. Time will tell if you’ll be able to transform into her.

* In Super Smash Bros. Melee, Zelda is able to transform into Sheik using her down-B attack button press. In the latest game in the series, Super Smash Bros. Brawl, this same transformation move can be done in game, but you’re also able to select Sheik from within Zelda’s character icon on the character select screen before you start your fight.

Addition #2: A new addition to the roster is Rosalina who is accompanied by Luma from the Super Mario Galaxy series, where they made their debut on the Wii. Both act as one with Rosalina controlling Luma’s moves.
By the way, Rosalina was also confirmed as a playable characters for Mario Kart 8!

Addition #3: Marth, the protagonist from the original Fire Emblem games in the Tactical RPG series joined the party a while back too. Check out his and everyone else’s pictures and gameplay in the videos below.

Check out the first Super Smash Bros Wii U and 3DS reveal trailers for these newcomers.

Who do you want added to the Super Smash Bros Wii U & 3DS roster?