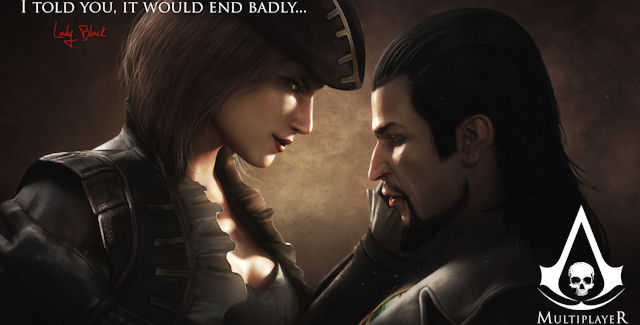 Watch the video guide below to see all Assassin’s Creed 4 Unlockable multiplayer characters as well as their costumes and more.

On Xbox 360, PS3, PC, PS4 & Xbox One you unlock 3 new playable multiplayer characters by buying Assassin’s Creed IV: Black Flag downloadable content (DLC is not available on Wii U I’m sorry to say). They are the gruff and short-tempered Blackbeard, the Aztec templar known as The Jaguar, and the graceful negotiator The Orchid.

Here’s a look at the all new DLC characters & customizations from Blackbeard’s Wrath DLC:

You’ll unlock additional character options as you level up your character in multiplayer.

Costumes and extra items can be unlocked for your multiplayer characters through natural level progression. This progress rewards you with 100’s of unlockable costumes, styles, colors, moves & equipment. To enable any unique character weapons or make appearance changes (including costumes / colors / animations like taunt & stun moves), go to the Characters menu in the Customization tab.

The multiplayer characters will gain these extras…

Take a look at this video to choose which multiplayer items you’d like to unlock first in Assassin’s Creed 4:

Let’s not forget about the buy-able Champion Packs that contain unique costumes, full ability sets and special patron pictures. You can purchase a champion pack for every character at any time. Each week (4) costumes are placed on sale at a 50% discount. Starting 12/19 to 12/25, you will find the following packs on sale in the Abstergo Store:

Furthermore, special editions of the game include exclusive multiplayer items as well…

Choose from a cast of over 15 unique characters, each with their own style and personality, truly reflecting the blend of cultures and influences that were the Caribbean at that time of history.

Note: The characters overview above lists how to unlock the initially unavailable 3 characters that make up the total of 18 confirmed characters (so far).

This video shows the above listed multiplayer characters in action:

Get a closer look at the multiplayer mode in this Assassin’s Creed 4 multiplayer trailer. Multiplayer Lead Game Designer Tim Browne lays it down on all subjects multiplayer, from Modes to Abilities to Perks.