Pokémon Rumble U Review (Wii U) 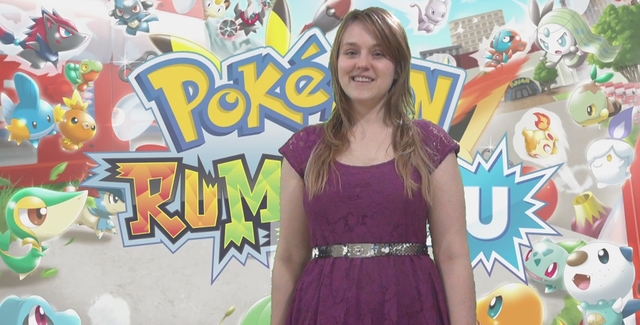 Story
Pokémon Rumble U is the third game in the Pokémon Rumble series. I had believed that Pokémon could not get any cuter. Tiny Toy Pokémon on a grand adventure proved me wrong. The adorable Toy Pokémon are lost during their delivery and swept down river to an unfamiliar place. The small group of Pokémon protagonists are determined to find their way to the Toy Pokémon Shop. The other Toy Pokémon will not go back to the Toy Shop without a fight.

Gameplay
Up to four players can use up to 100 Pokémon to battle concurrently. Defeated Pokémon can “befriend” the player team, each Pokémon have unique strengths and weaknesses. The controls are intuitive but the screen can get very busy and distracting. I played Rumble U solo and immediately identified with the enemies’ perspective. I did not agree with forcing the Toy Pokémon to go back to the Toy Store, they should be free to live their own lives. In my defense, I love a good rebellion.

Aesthetics and Graphics
Graphically, Rumble U looks good for the Wii U, crisp and clean. The arena designs are simple and colorful, but blindingly saturated once the hectic battles start. The Toy Pokémon are adorable and I am tempted to buy a figurine. Unfortunately, the figures are randomly distributed instead of being sold individually.

Audio
The music, much like all aspects of Pokémon Rumble U, is fast and repetitive. Once the battles start, frequent punctuations of sound effects layer over the music. It sounded like I was at a rave. Seriously, do not take any chances with this game if your child has a history of seizures.

Fun Factor
My favorite part of Pokémon Rumble U is that all six hundred and forty-nine Pokémon of generations one through five are included. That is a lot of Pokémon, and unlike the RPG series, it is somewhat realistic to try to collect them all.

The worst aspect of this game is the repetitive battling, which gets boring quickly for someone who likes variety and exploration.

Replay Value
I consider the replay value of Rumble U to be low, considering it could not keep my attention.

Ingenuity
The Wii U’s NFC technology, using physical Toy Pokémon figures to interact with the game, does sound cool. For me, I have to enjoy a game before I purchase any additional content.

Recommendation
I would buy Pokémon Rumble U for a child between four and eight years old. The gameplay is simple, involving little more than mashing buttons, making it easy to pick up and play right away. There is no exploration or trainers and there is little in common with the RPG series. Fans of the Pokémon rumble series and fans arena battle games will likely enjoy this game more than I did. I was personally hoping for a classic Pokémon battling game reminiscent of Pokémon Stadium 64.