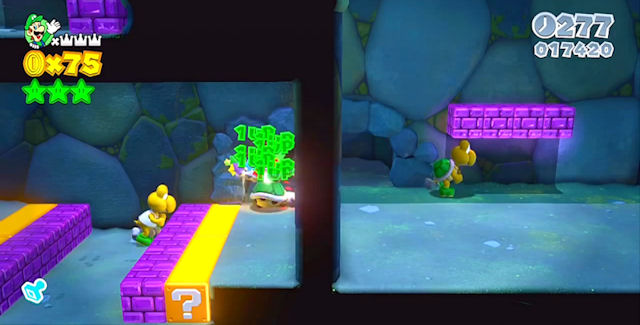 Here are some of the newly discovered Super Mario 3D World glitches.

Note that these can of course get patched by Nintendo in the future. But you might encounter the here-under listed glitches for yourself in the meantime, should you feel it’s handy to exploit them (where possible).

* Grab a Koopa Troopa’s shell and put it down between two walls of the small path into the back of the cave. That way you kick its side by jumping on the top-side of the shell — first it’ll hit you and make you small but you need that to happen — so the shell will then keep bouncing back and forth between the two walls. While that’s happening, for as long as you’re also continuously jumping on the shell (after a while it’s automatic) it’ll first start giving you points, which then turn into infinite lives. You can get the maximum of 1,110 lives in a few minutes, wow!

This is an awesome trick that will get you infinite 1-ups in a couple minutes. It’s the fastest way to do this glitch and you’ll be able to get all 1,110 lives without the time even getting close to running out! Once, you’re starting to get the lives, you can set your controller down until you’re maxed out!

Here’s the full glitch & how to perform it in the game:

Find out what happens when you try to bump a block from a rolling stone, as Toad.

Here’s the glitch video that shows it happening:

Have you encountered any Super Mario 3D World glitches?