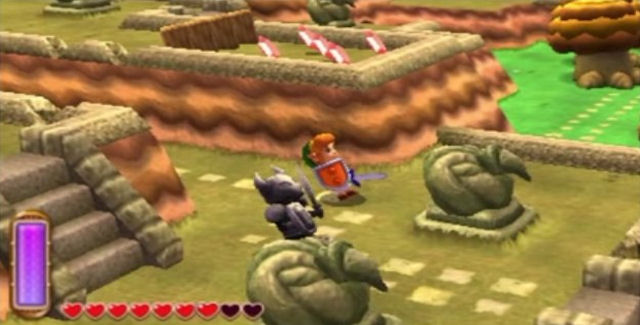 Let’s take a look at some funny Zelda: A Link Between Worlds easter eggs! They can be found if you know where to look! 🙂

Easter eggs have been confirmed for Zelda: A Link Between Worlds. Watch footage of them all below.

Index of Zelda: A Link Between Worlds Guides:

Location: The entire game is actually played in a 3D angled top-down perspective! This means that every item & object in the game world (including Link himself!) is tilted backwards by 45 degrees, creating the illusion of a world designed specifically for viewing at a perpendicular angle.

How To See It In-Game Yourself: Switch to the side view while transforming into the painting/wall-walking mode.

Eiji Aonuma, producer on the Zelda series, hosted a speaking session on The Legend of Zelda: A Link Between Worlds at New York Comic Con. Take a look at the highlights in this video, where he starts talking about the crooked perspective 1:37 minutes in.

Location: In Hyrule you can find the actual Majora’s Mask hanging on the wall in Link’s House!

Location: Find Ravio’s Diary in the vacant house of Lorule, which is the same location as Link’s House in Hyrule. But it only shows up in there when you’re playing on Hero Mode* difficulty.
* Hero Mode unlocks after you’ve beaten the game on Normal Mode.

The 3 days are a reference to the N64 classic The Legend of Zelda: Majora’s Mask where the moon is falling into the Earth and Link has 3 days to stop this disaster from happening. The “A Link Between Worlds” producer, Eiji Aonuma — who was the director on “Majora’s Mask” as well — has been hinting at a connection between the two games… which you can hear him say in the video presentation at the top of this page.

Take a look at what Ravio’s Majora’s Mask Diary says:

The Lorule civilians start wearing masks (Thief girl included) after you complete the Thieves Hideout, and they hope to transform into monsters.

Have you found any Zelda: A Link Between Worlds easter eggs?

Tags: The Legend of Zelda: A Link Between Worlds