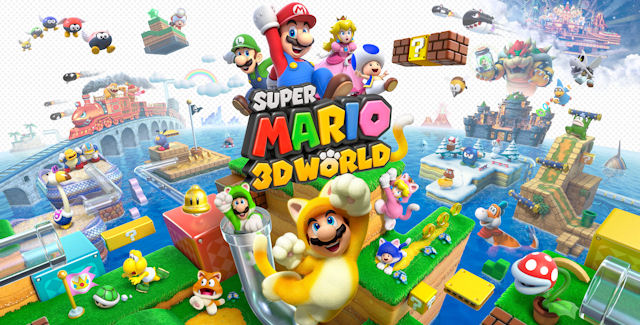 Our Super Mario 3D World walkthrough will guide you through the beginning to ending moments of gameplay with strategy tips for this platformer on the Wii U.

Super Mario 3D World is the latest entry in the series of 3D Mario action games. Like Super Mario 3D Land before it, this game is fun and accessible to all – anyone can play!

Super Mario 3D World supports multiplayer with up to four players – in addition to Mario, Luigi and Toad, you can now play as Princess Peach & Rosalina too! The fun, chaotic multiplayer mode is a new way for players to enjoy 3D Mario games, as the four players help (or hinder!) each other through the game. Super Mario 3D World also includes a new power-up, Cat Mario. This form brings with it new abilities, such as climbing walls and attacking enemies with your claws.

Suitable for viewers age 3 and up. This game includes Mild Cartoon Violence.

Leap into the first multiplayer Mario platformer set in a 3D world! Play as Mario, Luigi, Princess Peach, and Toad—each with their own special skills—in the all-new Sprixie Kingdom. Scamper up walls with the new cat power-up to find secrets or pounce from above to claw enemies. Enjoy a solo romp or add friends on the fly for instant Mario multiplayer* magic!

Freely roam the world map and each sprawling stage alone or team up with friends to find hidden stars while competing to take the crown for most coins and points found. Tap the Wii U GamePad controller’s touch screen to freeze enemies and reveal invisible secrets. Or, use the GamePad for off-TV play while tilting it to spot hidden nooks and crannies with the moveable camera. All this and more makes Mario’s world deeper than ever. Jump on in!

How The World Map Is Split Up:

What The Characters Skills Are:

Welcome to the Super Mario 3D World walkthrough! Tilmen will be your guide showing you around the game’s levels.

Story: “On a starry night in the Mushroom Kingdom, Mario, Luigi, Princess Peach, and Blue Toad take a walk outside of Princess Peach’s Castle when they discover a slanted Clear Pipe along the path. Mario and Luigi fix the Clear Pipe with hammers and wrenches, and the Sprixie Princess, a green fairy-like creature, pops out in front of them and starts to frantically ask for help. Suddenly, Bowser, who emerges from the pipe; finds the Sprixie Princess and captures her inside a bottle before disappearing back down the pipe with her. Mario and the group enter the pipe to pursue Bowser. They end up in the Sprixie Kingdom, where the journey mainly takes place.”

Let’s walk you through this first World, the Grass World.

The third World is an ice-cold Snow World.

The fourth World is the Mountain World.

The fifth World might as well be named Beach World.