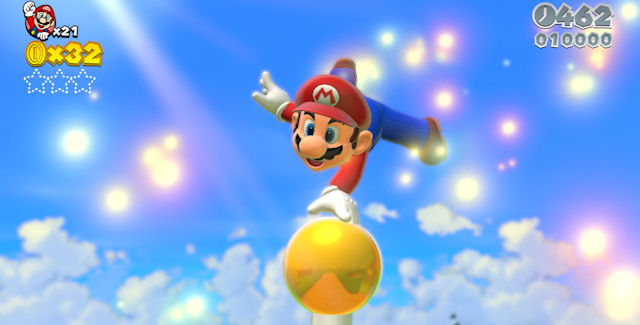 The infinite 1UPS trick is back like it is in every Mario game!

First, take the bottom underground path in World 1-2: Koopa Troopa Cave.
Second, grab a Koopa Troopa’s shell and put it down between two walls of the small path into the back of the cave.
That way you kick its side by jumping on the top-side of the shell — first it’ll hit you and make you small but you need that to happen — so the shell will then keep bouncing back and forth between the two walls. While that’s happening, for as long as you’re also continuously jumping on the shell (after a while it’s automatic) it’ll first start giving you points, which then turn into infinite lives. You can get the maximum of 1,110 lives in a few minutes, wow!

How To Unlock The Luigi Bros. 2D Game

Unlock Method #1: You must have a Super Luigi U savegame on the Wii U console that you’re currently playing Super Mario 3D World on.

Unlock Method #2: You must finish Worlds 1 to 8 of Super Mario 3D World.

How To Unlock Playable Rosalina

Location: In World 1 — after beating Bowser in World 8 — the Sprixies will build you a rocket to go to the Star World

How To Find The Gold Train

Want to find where the Gold Train bonus level full of coins and 1-Ups is in Super Mario 3D World? This video guide will show you how to unlock it.

This official Nintendo video shows you some unlockables and tips for Super Mario 3D World. Enjoy!

While you’re on Super Mario 3D World’s title screen (the first screen when you start the game) you should wait a few minutes and then the game will switch over to show you 4 different title screens.

There are 4 post-game Worlds! Some of these Worlds have other unlock requirements, such as finding all Green Stars, Stamps & Gold Flagpoles in the game. Not surprising since you already need 170 Green Stars to unlock the boss of World 8.

Unlocking all 4 Worlds is shown in this video:

How To Get 5 Shiny Stars On Your Save File

To get 5 shiny stars on your save file, you’re going to have to unlock pretty much everything in Super Mario 3D World.

To clear 100% of the game, you’ll have to do the following:
• Defeat Bowser (finish Bowser’s Castle level) in World 8 AKA Bowser World,
• Find all the Green Stars from World 1 up to the special Flower World,
• Find all the Stamps from World 1 up to the special Flower World,
• Get all of the game’s Gold Flagpoles; You can touch the top of every level’s flagpole easily by using the Catsuit to climb to the top,
• All 5 playable characters must complete every level in the game. Check below for a trick to replay the game only twice instead of 5 times.*

* Instead of 5 times with a different character each time, here’s a trick to only play twice:

How To Win At the Slot Machine

Here’s a trick to winning every time at the slot machines in Super Mario 3D World.

It’s simple: Jump on the blocks feeling the rhythm of the music as the beats play.

Do you know of any Super Mario 3D World cheats or unlockables?
Let us know in the comments, you’ll get credit for finding out. – Thanks for visiting!